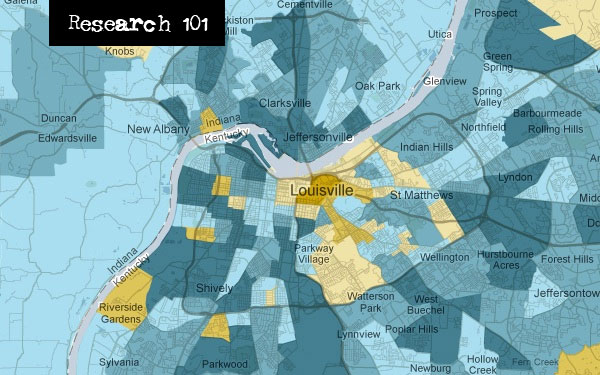 As the research guru here at CM, I get asked a lot of questions. Some questions are more complicated than others, but the answers are usually simpler than the methods used to reach the conclusions. For example, how would you explain to somehow how a car starts? The simplest answer is to turn the key, but we all know there is more to it than that. Same goes for research. The answers can be simple, but the explanations are usually much more complicated.

Enter Research 101. Don’t worry, there won’t be a final exam or even homework. This is simply a blog series I will be writing over the next few months to help answer some of the most common questions surrounding researching methodologies.  My goal with this Research 101 series is to provide readers with an educational foundation in market research techniques that can be applied by anyone in the marketing industry.
This month’s post addresses demographics and cartography. One of the most crucial variables in market research is cartographic boundaries. Boundaries are important because data is only as valuable as the area from which it originates. Most of us are already familiar with the most common cartographic boundaries – states, counties, ZIP codes, cities and towns. In the world of research, however, there are other lesser known classification systems used by the Census Bureau for the purpose of providing a stable set of geographic units for the presentation of data. These cartographic systems, in order from smallest to largest, are census blocks, census block groups and census tracts.
First introduced in 1990, census blocks are statistical areas bounded by visible features, such as streets, roads, streams, and railroad tracks, and by non-visible boundaries, such as selected property lines and city, township, school district, and county limits. Generally, census blocks are small in area; for example, a block in a city bounded on all sides by streets. Census blocks nest within all other tabulated census geographic entities and are the smallest unit for all tabulated data. Census blocks in suburban and rural areas may be large, irregular, and bounded by a variety of features. In remote areas, census blocks may encompass hundreds of square miles. As a result, the population of blocks vary from zero to several hundred. In total, there are approximately 8,200,000 blocks in the U.S. and Puerto Rico.
A census block group is a cluster of census blocks having the same first digit of their four-digit identifying numbers within a census tract. Block groups generally contain between 600 and 3,000 people, with an optimum size of 1,500 people. There are about 39 blocks per census group. Block groups never cross the boundaries of states, counties, or statistically equivalent entities, except for a block group delineated by American Indian tribal authorities. Each census tract contains at least one block group, and block groups are uniquely numbered within the census tract. A block group is the smallest geographical unit for which the census publishes sample data. The United States, including Puerto Rico has 211,267 block groups.

Census tracts are small, relatively permanent statistical subdivisions of a county delineated by local participants as part of the U.S. Census Bureau’s Participant Statistical Areas Program. Census tracts were first used in the 2000 census. Census tracts generally have between 1,500 and 8,000 people, with an optimum size of 4,000 people. Each US county has atlas one census tract. Census tracts are designed to be homogeneous with respect to population characteristics, economic status, and living conditions. Census tract boundaries generally follow visible and identifiable features.The spatial size of census tracts varies widely depending on the density of settlement. Census tract boundaries are designed with the intention of being maintained over many decades so that statistical comparisons can be made from census to census. However, physical changes in street patterns caused by highway construction and new developments, may require occasional boundary revisions. In addition, census tracts occasionally are split due to population growth or combined as a result of substantial population decline. Census tracts are identified by a four-digit basic number and may have a two-digit numeric suffix. The United States, including Puerto Rico has about 66,000 census tracts.