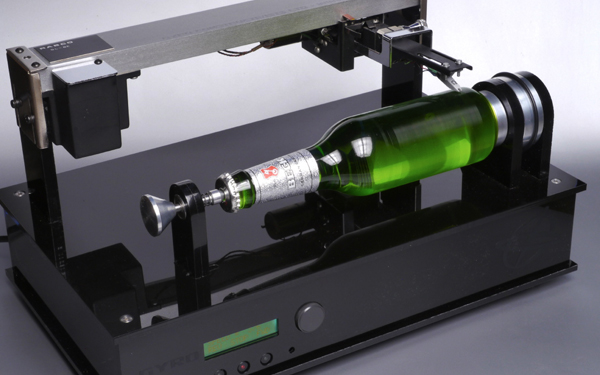 We have highlighted some pretty cool (if mostly useless) advancements in beverage service on our blog, including Coke bottles made of ice and Budweiser Buddy Cups, but this one might just be the most amazing. And useless. The Beer Player.

The folks at Beck’s Beer and Gyro Constructivists have come up with a process by which they can record sound onto the surface of a beer bottle, much in the same way Edison originally recorded sound onto wax cylinders more than a century ago. While it was obviously a challenge to get a high fidelity sound from the surface of a bottle, they managed to get a fairly high quality recording of the latest single from Auckland pop band Ghost Wave, “Here She Comes.” Check out the story of creating the Edison Bottle here.

Being that I a recently rediscovered the joys of vinyl recordings (with a growing collection of LPs to prove it) and I’m a long-time fan of beer (with a collection of embarrassing stories to match), this project is right in my wheelhouse. And while I can’t completely get past the publicity stunt nature of this project, (there’s one recording and one player, with no plans to do more) the cool factor of the whole thing has managed to quell my cynical nature. They spent a ton of time and money to do something cool, but ultimately useless. Except that it got me to listen and to think about Beck’s for the first time in a very long while. Well played.