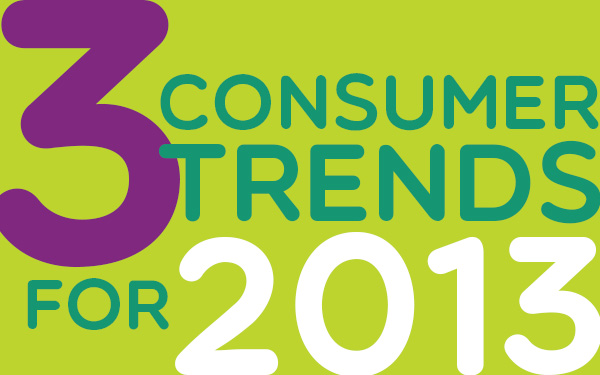 The new year is a time for both reflecting on the past and looking forward to the future. As marketers, we should use the new year as a time to evaluate the psyche of the consumer paying special attention to how their mindset has evolved in the last year.

To do so, one must think beyond demographic shifts to identify any technological, economic, cultural or legislative influencers that might impact consumer behavior.

Then, consider what these new trends might mean for clients and their products.I have identified a few macro-level consumer trends that will shape consumer behavior over the next year. Keep in mind that forecasting trends is not an exact science. These are simply a list of broad consumer trends that I believe all brands should be aware of in the coming year.

The Tech-Infusion
Ordinary objects are evolving into smart devices with augmented functionality. It’s no longer about just smart phones. There are tech-infused shoes, watches, kitchen appliances and even sunglasses. This infusion of technology into consumer products allows those items to be more productive and enjoyable to use. Expect to see more everyday products become intelligent devices in the coming year with an emphasis on smartphone compatibility. Integration with the smartphone is crucial because consumers see their phone as the central hub to their digital lives.

Cohabitation
Marriage increasingly is being replaced by cohabitation, single-person households and other adult living arrangements. The recent decline in the number of Americans getting married shows no signs of reversing. The decline in nuptials from 2008 to 2011 is in keeping with a general trend away from marriage in the US. Barely half of adults (51%) were married in 2011, compared with 72% in 1960.
Marriage isn’t the only explanation for this newfound growth in cohabitation. The bleak economy has also contributed to more adults living in shared households. In 2011, 17.9% of people 18 and older lived in someone else’s household, up from 16.0% in 2007, prior to the start of the economic recession. More than one in three young adults 18 to 24 were residents in someone else’s household; the same was true of more than 30% of those 25 to 34. Many of the adults sharing a household with relatives would have been in poverty if they had been living on their own.
Cohousing should redfine the meaning of the household for marketers. These shared households have inhabitants in various stages of life. Thus, advertising platforms that rely solely on household segmentation might no longer be viable. Instead brands should look to messaging platforms that can target each consumer in the household individually based on their behaviors and interests.

The Made in America Movement
Apple recently announced that it would begin manufacturing some of its products in the United States. US automotive manufactures have made a roaring comeback with Chrysler booking its first profitable year in a decade. These are just a few of the many reasons to support the notion that more consumers will be buying more American made products in the next year.
In times of economic stagnation, such as now, the “Made in USA” message has been particularly effective. The Harrison Group and American Express recently released a study indicating that 65% of high-end shoppers now prefer to buy American. In today’s marketplace, The “Made in USA” label represents high-end quality goods that carry a higher price tag. Apple’s announcement to manufacture products in the United States has helped to make buying American cool again. Fresh off the Olympics and a presidential election, consumers have a heightened sense of national pride that will propel this trend into the limelight. 2013 will be a good year for American-made brands.

There you have it. These are just a few of the many trends that will shape consumer behavior in the new year. Please feel free to add to the discussion by commenting on what you believe will be some of the hottest consumer trends this coming year.