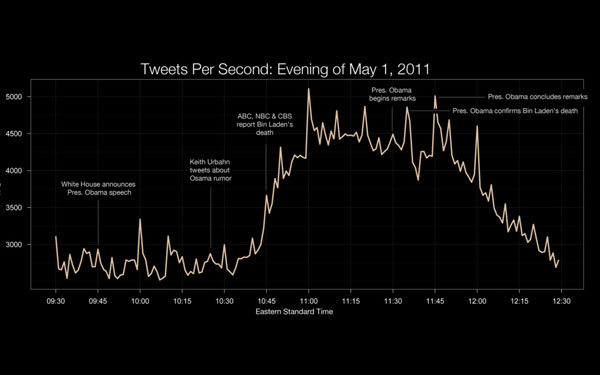 The Internet-age-old complaint with news organizations is they did not embrace the web soon enough. Over the past five years they have made strides to catch back up, but their social media savvy readerships have been moving at 140 characters a second, and that’s a lot faster than it sounds.

Don’t think so? Consider this: After the news leaked that Osama bin Laden was dead, the social platforms were the go-to source for the latest information. During President Barack Obama’s speech there were over 5,100 tweets per second, according to Twitter. That’s a 306,000 tweets per minute. Twitter also saw the highest sustained rate of tweets per second ever, averaging over 3,400 TPS for over 3.5 hours.

That is mind blowing amounts of information coming faster than any news organization can possibly digest, not to mention even trying to fact check it all. Quite frankly, though, it didn’t matter. Much of the information coming from broadcast news organizations was being found on social media websites, and likely minutes – possibly even hours – after Twitter users had already consumed it and moved on.

While most of us remember where we were when we heard about the 9/11 attacks, we will likely remember how we found out about the death of Osama bin Laden. For many people it will be a social media platform. I would have missed the historical speech by the President had it not been for a linked article on Facebook. Instead of switching on the television, I switched the phone application from Facebook to Twitter to learn more.

The power of Twitter isn’t behind its accuracy, but its transparency. All of this information – accurate or not – is out in the open and available immediately. A great example of this came with the outbreak of tornados that ripped through Southern states recently. Users were able not only able to update each other much faster twith Twitter, but had all of this information in the palm of their hands. Photos and videos of the storm went viral within minutes, some getting hundreds of thousands of views within hours.

Never before have we had so much power and information just sitting and waiting at our fingertips. We’re just a #hashtag click away from it all. While news organizations are still trying to get in the social media door, no one seems to be holding it open for them. Their readers have figured out how to get through on their own.