A call to service: Kentucky’s chosen are making a real difference

If you’ve lived in our great Commonwealth for any length of time, chances are you’ve met a Kentucky Colonel.

No, not that Colonel (we’ll get to that in a minute). We’re talking about the exceptional men and women who’ve earned this title of distinction because of their leadership, generosity, and commitment to serving others. The sitting governor commissions Kentucky Colonels, and it’s the highest honor our governor can bestow. Once appointed as a Kentucky Colonel, you’re one for life.

The ﬁrst Kentucky Colonel was commissioned in 1813. There have been more than a few notable names to join the ranks since then — Bob Hope, Fred Astaire, all the Clooneys, both Presidents Bush, Winston Churchill, Walt Disney, all four Beatles and Elvis Presley, the GOAT Muhammad Ali, a couple of Popes, and … Harland Sanders. Yep, the Colonel was legit.

So, yeah. It’s a big deal, but the bigger deal is the difference you can make after you get it. It’s so much more than just a title. 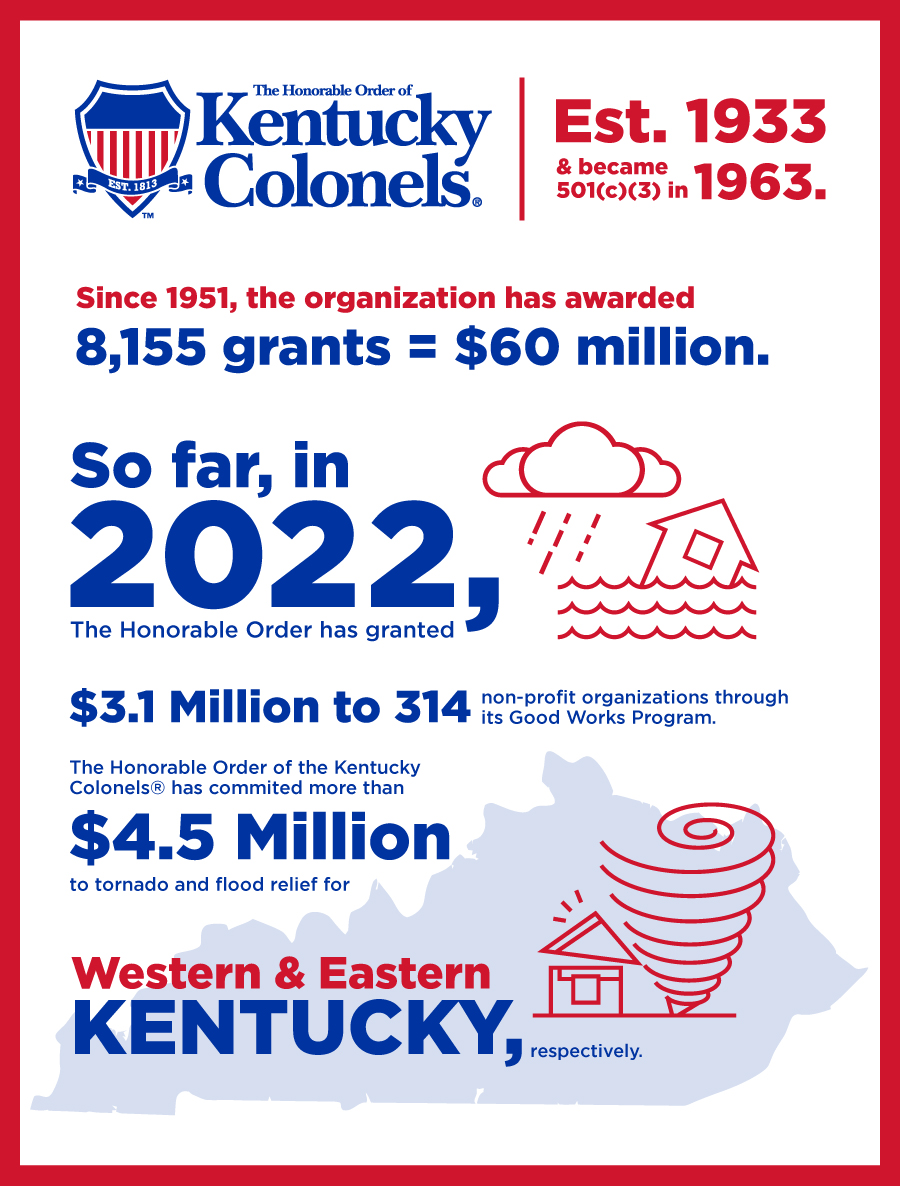 Let us show you the money.

Once commissioned, you’re invited to activate your membership in the Honorable Order of the Kentucky Colonels, a voluntary philanthropic organization that supports Kentucky’s neediest charities. The Order was established in 1933 and became 501(c)(3) in 1963.

One of its earliest funding initiatives was the 1937 flood relief. Since 1951, the organization has awarded 8,155 grants totaling more than $60 million. So far, in 2022, the Honorable Order has granted $3.1 million to 314 nonproﬁt organizations through its Good Works Program. It has also committed more than $4.5 million to tornado and ﬂood relief for Western and Eastern Kentucky, respectively. It’s not overstating to say the Colonels’ funding touches virtually every person in the Commonwealth in one way or another.

We bet you’re thinking, that’s wonderful and everything, but why are you telling us all this?

Because the Colonels’ vast impact is Kentucky’s best-kept secret, we think it’s long past time to let the cat out of the bag. 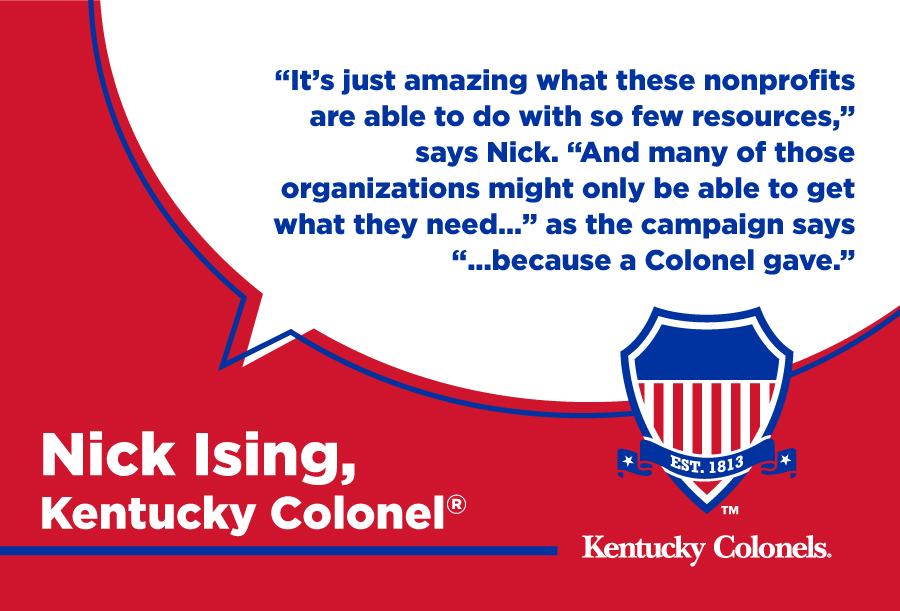 Getting the word out.

If you don’t believe us that you know a Colonel, there’s one right under your nose — Current360’s President, Nick Ising.

Nick was commissioned when he was 19 years old. Anyone who knows him is not surprised by this. He was an exceptional young man to earn this recognition before he even graduated from college, but he will be the first to tell you he didn’t know what it meant until many years later.

It wasn’t until 2007 that he understood their true impact. That’s the year when a Current360 client, Jim Lindsey (then a trustee) asked Nick (and Current360) to help with the organization’s marketing.

Many, if not most, grant recipients are small nonprofits. A grant of $10,000 or $20,000 could help buy a new van to transport disabled clients or put new windows in an aging children’s theater. “It’s just amazing what these nonprofits are able to do with so few resources,” says Nick. “And many of those organizations might only be able to get what they need…” as the campaign says “…because a Colonel gave.”

From the annual “Colonels of Distinction” contributors report, to the twice-yearly Bugle magazine, to social media and public relations, to newsletters, marketing collateral, and more, Currrent360 is proud to partner with the Colonels to raise the Order’s visibility and spread awareness about their Good Works program across the Commonwealth. It’s long past time for the Colonels to get the recognition they deserve.

In fact, we’re in the process of launching a statewide multimedia campaign, which includes a new TV commercial to remind Colonels how important it is to renew their membership in the Honorable Order.

At Current360, we’ve never met a problem we couldn’t solve. Properly publicizing the legacy and continued great works of Kentucky’s crown jewel of compassion? Well, that’s no problem at all.

Will Lunch Ever Make a Comeback?

Mourned by few, the era of 3-martini lunches is long gone. But, is the era of just having lunch with coworkers, clients, or friends also