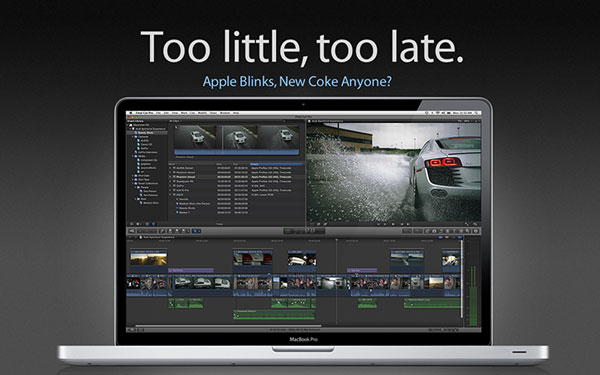 As I wrote earlier this summer, Apple released version 10 of its market leading video editing software Final Cut Pro, only to start losing its current core market, professional editors. Much complaining has been loosed upon the Internets, long and loudly, about FCPX and what it left out of its initial release, but one of the biggest complaints for the full time professional editor was that Apple pulled all of its existing stock off the shelves upon releasing FCP-X. Yes, they seemed to say, we are completely changing the editing paradigm, removing any way to export edit information, taking away the ability to open your current projects in the new version, AND we will not let you purchase any additional licenses of the old software.

For us this was not a problem, but there were many post houses around the world who’d been waiting for the new version to come out, because they needed to purchase additional seats of the program, but wanted to see if Apple was going to fix a lot of the recurring bugs and update the software to 64 bit. When Apple pulled FCP7 off the shelves, these places complained. Long and loudly.

Last week, Apple quietly reversed its decision and started selling FCP7 again in Final Cut Studio 3 at the same price as it was when they pulled it. Apparently they heard the wailing and the gnashing of teeth, though the intent of this move remains unclear. If they are hoping to stop their highly vocal user base from leaving the tent, they are probably too late. Yes, they are making the old software available, but Adobe and Avid have been offering cross-grade discounts for over a month, and if Internet forums are any indication, a lot of professional full time editors are jumping ship, making Premiere or Media Composer their primary, if not only tool. Not to mention this is still an End Of Life program, meaning that Apple will stop supporting it at some point in the future, so how many users does Apple expect are still going to purchase it? Another widely speculated theory is that Apple is merely selling off their old stock of Final Cut. If that was the case, why didn’t they offer to sell off the remaining stock in the first place?

Personally, I don’t think they know what they are doing. I think they are rattled by the extreme displeasure voiced by so many people who were until 2 months ago Final Cut evangelists. And I think that they are committed to pursuing the non-fulltime editor who doesn’t need all the options and tools available to those of us who require them, but are having second thoughts about their strategy. There are so few editors who need those tools, compared to the masses of professionals who need a tool just flexible enough to cut together a video quickly and get it out to a variety of channels in one workflow. In any case, it is too little, too late. It would take several stunning reversals for Apple to regain the trust of its once core user base.