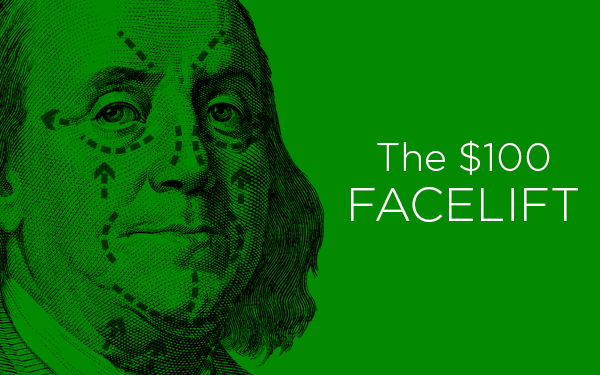 My latest post is all about the Benjamins, baby, and for those of you who are getting bored of staring at their same old hundred dollar bills – good news! There’s a new hundo in town. Benjamin Franklin is finally getting the facelift he deserves! These freshly designed $100 bills started making their way into circulation yesterday, and although they might not appear to be all that radically different from our old bills, these new Benji’s have a ton of sophisticated anti-counterfeiting technology going on under the hood.

Here’s a breakdown of everything you need to know about the bill’s new makeover that’s hitting your wallet this week:

Other new features on the new bill include a security thread that when held to the light you’ll see an embedded thread that runs vertically on the bill. The thread is imprinted with the letters USA and 100. The new note is also printed on special paper which includes red and blue security fibers, and is one-fourth linen and three fourths cotton. The new bills will only be printed in two locations, Washington, D.C. and Fort Worth, Texas. You can tell where the bill was printed because if it has a small F.W. in the top left corner it was printed in Fort Worth, if it has no indicator it was printed in D.C.

From a design standpoint, the bill seems quite cluttered with verbiage, images, and a new thick blue line running down the center that isn’t so attractive to the eye. But with all currency, security trumps design, and this new design is all about stopping potential counterfeiters in their tracks. What do YOU think about the new bill design and the high-tech security features?