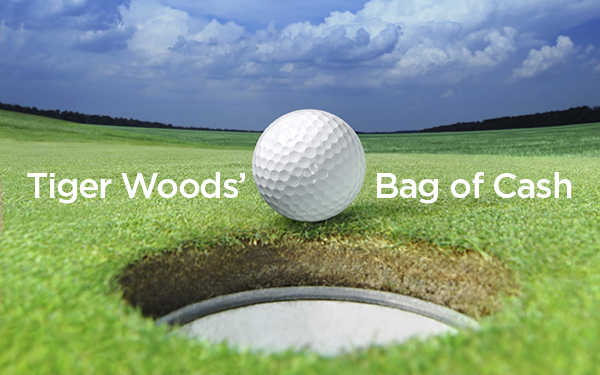 Professional golf’s most decorated, currently active player may have been out of commission since March with a back injury, but that hasn’t kept Tiger Woods from bringing home some bacon. Last week, Tiger inked a deal with the nutritional supplement company MusclePharm. In the contract, Tiger receives $5 million in MusclePharm stock and a royalty on any co-branded products over the next four years. In exchange, Tiger will feature the MusclePharm logo on his golf bag. Well that, plus being a social media brand ambassador and making a couple commercial appearances. But the bag is where it’s at.
It comes to no surprise that when Tiger puts a new logo on his bag, it makes the news. The day the news of the partnership was announced, shares of MusclePharm jumped about 10%. That means Tiger got about a $500,000 bonus on day one.
So why would a company pay $5 million to have their logo on Tiger’s golf bag? It’s all about brand marketing reach and frequency:

As with any celebrity endorsement, there are risks. Maybe he’ll never win another tournament or, God forbid, his life falls apart again. But MusclePharm appears to have jumped back on the Tiger bandwagon at as good a time as any. The golfer seems poised and ready to take over the golf charts once again.
And for an emerging performance brand—baring ringing endorsements from other star athletes like Eric Decker and Colin Kaepernick—adding Tiger Woods should only strengthen their portfolio.
I like the bold move from MusclePharm. Hopefully the product is good, because there will be a lot of people trying it now. I mean, Tiger Woods is on the bottle. It’s got to be good right?