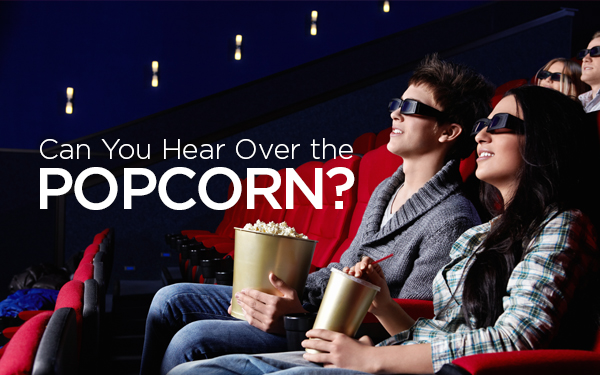 If I were an advertiser running spots at your local cinema, I might be afraid of the fact that over half of Americans now have smartphones. Instead, a group of studious people at a university in Germany think advertisers should be afraid of  – popcorn! A study that has been released this week indicates that apparently a lot of people don’t have the ability to listen and chew at the same time.

The report describes the disruption of “inner speech” that occurs when one is chomping down on America’s favorite movie snack. For instance, when you hear or read a name like Heath Slocumb your inner speech subconsciously tries to pronounce that name and according to the University of Cologne, chewing on popcorn disallows the consumer from hearing that inner speech.

I don’t deny the logic, how many times have you been trying to eat a bag of chips, have a conversation with someone and have to stop chewing to hear what they say? However, these studies are always done with such controlled variables – here you go, this half gets free popcorn and this half doesn’t. When you’re finished, I’m going to give you guys a quiz and see who paid more attention. It doesn’t come to any shock to me that the people busy with popcorn paid less attention to the commercials than the people with none.

While things like chatty friends, smartphones and pregame snacks will continue to be distractions to moviegoers, cinematic advertising still proves to be successful. After all, everyone’s seat is facing towards your ad, it’s displayed on the biggest screen in the room and everyone has chosen to be there. It’s the perfect setup.

Finding a link between all of the “distractions” might be the key for advertisers – perhaps interactive ads that offer consumers a discount on their beverage or snack for participating? Sounds like a win for everyone to me. Six dollars for a box of Sour Patch Kids is just that – sour.

Check out this inner speech distractor.