Dear Husband, Step Away From The Milk

Home / Marketing / Dear Husband, Step Away From The Milk 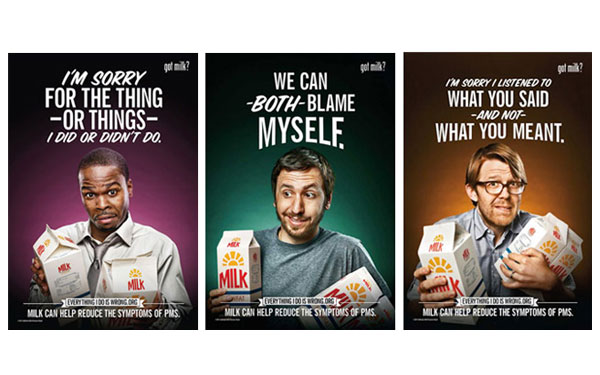 Have you heard about Milk’s new campaign?  According to Milk, it cures PMS. The campaign is called “Everything I Do Is Wrong.” The print ads have a sorry-looking and confused guy  and are using headlines like,  “We can BOTH blame myself” and “I apologize for letting you misinterpret what I was saying.”

The print ads send you to microsite that tracks the global PMS level and helps men create apology videos with big-eyed flying kittens.

So, when a girl is PMS’n, her guy should just hand her a glass of milk and it will cure all?  I am pretty sure a glass of milk is the last thing a girl wants when she is PMS’n.  Not to mention that some guys will try and hand a glass of milk to their woman and it won’t even be close to her time of the month.

Milk based its campaign on a study by the American Journal of Obstetrics & Gynecology in 1998.  The article states that vitamin D lowers PMS levels.  While it may be true that vitamin D lowers PMS levels, is that really an effective angle around which to build a campaign?  Milk is good for a lot of things and for ALL people of ALL ages…not just women and not just women who are hosting their monthly visitors.

This campaign is a total bust and I think they’ve lost sight of the core audience.  To me, this is just disgusting.  Milk and PMS?  It doesn’t even make sense.  They have managed to alienate a lot of people, including a TON of women.  AND, it is probably the women who are probably doing the grocery shopping.  I bet a lot of people switch to soy.  What do you think?   Funny or a total bust?  Will you continue to buy milk?

Join in the talk on their Facebook page. Or check out the funny knock-offs.