Do “Lays” a Flavor 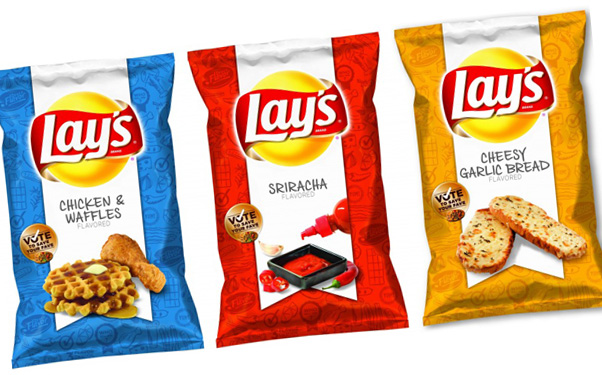 Last August, Lay’s Potato Chips invited people to submit ideas for the future flavor of Lay’s, the nation’s best selling potato chip. The company reportedly received 3.8 millions submissions to the “Do Us a Flavor” contest, which were then cut down to 20, by a panel of chefs and flavor experts. To generate excitement for the U.S. contest, Lay’s hired actress and restaurateur Eva Longoria and Iron Chef Michael Symon, who also had a hand in choosing the top flavors. Next, the flavored-chips were then further narrowed down to the top 3 finalists: Cheesy Garlic Bread, Chicken & Waffles, and Sriracha.

Other suggested flavors that didn’t make the cut were fried green tomatoes, potato salad, and ribs. The “Do Us a Flavor” contest has already been a big hit across the globe in more than 14 countries, resulting in a line-up of really wacky chip flavors like, Chili & Chocolate, Caesar Salad, Late Night Kebob, and even Cajun Squirrel.

The new flavors are due to hit stores today, and once you’ve scarfed a handful of each flavor, there are three ways you can vote for your favorite. You can go to the Lay’s Facebook Page, text “VOTE” to 24477, or use the Twitter hashtags #SaveChickenWaffles, #SaveGarlicBread or #SaveSriracha. If you vote on Lay’s Facebook page you’ll notice Facebook has changed the “Like” button to “I’d Eat That” exclusively for this contest to encourage more friend interactions and “flavor showdowns” among the contestants.

The inventor of the winning brand gets a cool $1 mil or 1 percent of the 2013 sales, whichever’s bigger. And the runners up get $50,000 a piece. So which flavor will reign supreme? It’s hard to tell because they all sound pretty flipping’ delicious. I’m personally rooting for Sriracha, a popular red hot sauce used in many Thai dishes. I love it because it offers a blend of heat and sweetness.

Which flavor will YOU vote for? Let me know by commenting below!