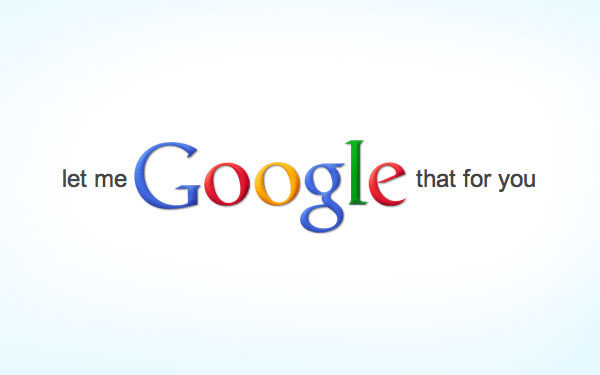 I have mad love for Google.  I really, really do.  It’s the kind of love that I would marry it if I could.  Lately I’ve been thinking about what I did before it existed.  If I wanted to know an answer to a question, then I would go and pull out my mammoth encyclopedias, make a trip to the library or I kept asking people questions until I felt like I had a good enough answer.  These days you ask someone a question and they’ll refuse to answer you and then ask “Is your Google broken?” or they’ll send you this link.  I’ll admit that I’ve done both of these.

I have a friend who never uses Google.  When she asks you a question and you tell her to Google it, she refuses.  Her iPhone will be sitting right there, but she will never pick it up and look up her question. Now this is not a dumb girl.  In fact, she’s quite smart. She says that all that information that Google spits at her is just way too overwhelming and “what’s wrong with asking questions anyway?”  You know what?  She’s right.  There is nothing wrong with asking people questions. Maybe the ease of “Googling it up” has made us all lazy?  Or is asking people questions until you get an answer and refusing to Google it yourself lazier?  Getting a quick and easy answer is great, but is it always better?

Of course, you are probably thinking “why doesn’t Tracey just Google it?”   So, I did!  I found that Nicholas Carr has already asked this question back in the summer of 2008 in an article written for The Atlantic.    His article is not only about Google, but the internet as a whole.  While I think he is paranoid in a lot of his thinking, I also think that he makes some valid points.  I’d love to know what thoughts other people might have.