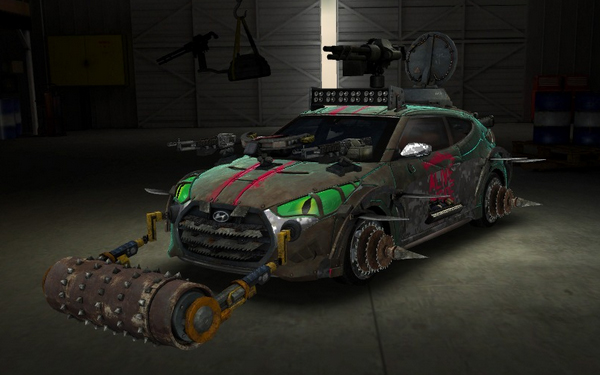 Hyundai, an early-adopter sponsor of the infectiously popular show The Walking Dead, piggybacked the 4th season’s episode premiere to launch their interactive app that allows you to design your very own zombie-proof survival machine.

It’s a great idea to incorporate Hyundai into The Walking Dead experience while creating engagement with the viewers, but as I watched the commercial, I felt their call-to-action fell WAY short of the mark.

“Build your own Hyundai zombie survival machine at WalkingDeadChopShop.com”

So, I go to the website and build my version of the best zombie survival machine. That’s it? I design it…look at it…then, done? I don’t get to fight zombies with it. I don’t get to drive it around a post-apocalyptic city. Is there any incentive for me to take part in this beside my desire to see what a chainsaw and flame-thrower look like attached to a two-door, hatchback Hyundai?

This is where I think Hyundai got it wrong. Apparently there is a contest and there is a winner to be announced. It took some digging (through YouTube and other articles), and I found the creators of The Walking Dead will select a winning design that will be built and unveiled at New York’s Comic-Con. Furthermore, fans can enter into the “Survive and Drive” sweepstakes to win a zombie-proof 2014 Hyundai Tucson. Now that’s something that will create participation. Who would want a zombie-proof machine as this imminent zombie apocalypse everyone keeps talking about is obviously right around the corner.

Why wouldn’t Hyundai explicitly state these points in the commercial or prominently highlight them on the homepage of the WalkingDeadChopShop.com website where they’re driving viewers to?

In addition to my issue of the call-to-action, Hyundai is driving viewers to WalkingDeadChopShop.com only to send them away from the website to download the app at the iTunes App Store or Google Play App Store. This extra step doesn’t seem like a huge burden, but why have the extra step at all?

So there’s my rambling about Hyundai’s commercial that partnered with a show that I’ve watched religiously with my friends through the past three seasons. You can agree or disagree with me.

In the end, I feel Hyundai’s campaign was short-sided, not well thought out, and poorly executed. With 16.1 million viewers watching The Walking Dead’s 4th season premiere…creating some type of consumer involvement of even a fraction of that 16.1 million would deem this campaign a success for Hyundai. We’ll see.