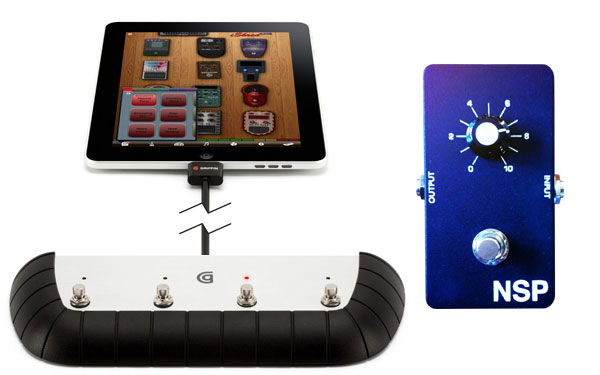 Much has been written about the rise of the iPad as a legitimate device for creating music.

Personally, I think a lot of that talk was hype (at least early-on), but no longer. While GarageBand is not going to replace ProTools or Logic as industry standards in recording, it has found its home for EASILY creating/composing songs on the fly. And with a little consideration and knowledge of mixing instruments, you can capture some high quality stuff with a program that comes FREE on every Mac product.

And now the 3rd party vendors are stepping up…

Griffin is offering up an external control for GarageBand’s effects. “With four assignable foot switches and a 1/4” effects pedal input jack, our StompBox allows musicians to use a compatible iOS device (i.e., iPhone, iPad or iPod touch) as a portable, programmable effects board and practice rig. StompBox effectively recreates the experience of an actual pedalboard.”

New Signal Process has a cool addition to the growing market. NSP sells an effect pedal that would look right at home on any guitarist’s pedalboard, which allows you to include your iPad in your signal chain. A description from there site: “It integrates seamlessly into your pedal board and comes with a custom hand made,12 foot, pro audio Mogami detachable cable so that you can place your iPad safely on your road case, a table, or a keyboard stand near you to interact with while you perform.”

All of that being said, I would like to add that I don’t think the iPad is going to replace the pedalboard of the average guitarist. I do think that it is a very relavent method for practice, writing, and composing while on the road, at the lake or anywhere else where it doesn’t make sense to try to drag an amp and a pedalboard full of effects.