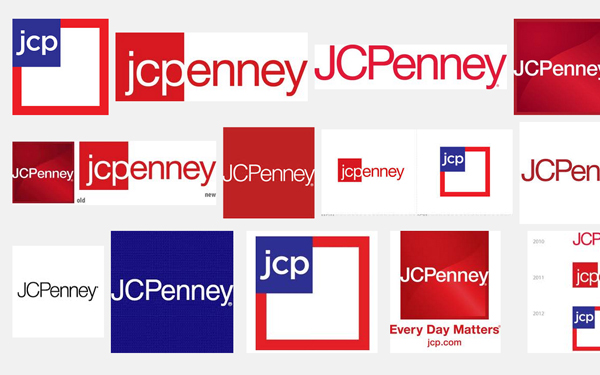 If you have been paying attention to any advertising or business news lately, it’s no secret that JCPenney has been going through an identity crisis. In fact, it was brought to my attention by Buzzfeed, that if you Google image search “JCPenney logo” more than six different logos appear at first glance. How did this mess start? And will JCPenney be able to fix their age-old brand?

The traditional JCPenney logo with the Helvetica type-face in red has been around until 2011 when the company remodeled the logo introducing a red square covering the “jcp” in the logo. Then in 2012, after hiring former Apple Executive, Ron Johnson, it was redesigned again to a contemporary, hip, square with a lowercase “jcp” inside.

Along with the logo redesign the company also began targeting an upscale audience. They dropped their iconic coupons and a few of their top house brands. The new audience didn’t exactly buy into the new brand that has always been known as a discount department store and many of the old customers walked away from the brand. Thus, leaving JCPenney with declining customers and a falling revenue.

After only 18 months of the attempt to rebrand, JCPenney executives freaked and decided to jump ship, firing Johnson and reverting back to the original logo and brand.

Where did it go wrong? JCPenney, tried to shove “hipness” onto coupon cutters and sales bingers and failed miserably. The idea became a clash for two very different targets. You can’t change the look of a brand and not change its value from the inside. The new commercials and print ads were bright, colorful and a bit “Target” reminiscent, but the store experience didn’t follow through.

Perhaps there should have been more focus on changing the experience with the employees and other in-store concepts.  JCPenney should have had brand training with their employees. Afterall, the employees are the brand holders and the ones who customers interact with. One thing that makes Apple’s brand work so well is that the chic/geek quality the brand has is also carried over into the in-store experience. JCPenney may have changed their logos, ads, commercials and even their promotions, but if you walk into the store and it still feels like the old culture then the redesign has been unsuccessful; confusing the consumer. Maybe they should have started from the inside out.

I’m not exactly sure Ron Johnson had the troops behind him on this idea. He was only given 18 months to turn a 100-year-old brand into a completely different direction. It doesn’t seem like enough time. Were the top guys more concerned about revenue over creating a new value for their brand?