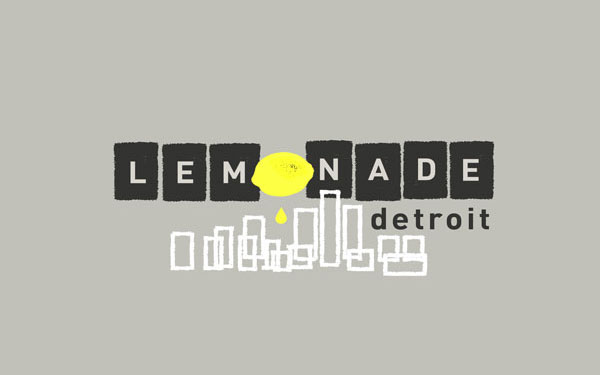 The process of rebranding a tarnished product is rarely an easy one. The process of rebranding a tarnished city, well that is NEVER an easy one. Cities are living, breathing organisms. There’s no one thing that makes a city what it “is.” If a city has a negative reputation, there are countless misconceptions to tackle, negative opinions to overcome and so many mindsets to change. Rebranding a city takes more than just a marketing campaign, it takes passionate people dedicated to inspiring a change. And lots of ‘em.

I know what you’re thinking. “YOWZA!” How in the hell does one person inspire change in Detroit, Michigan?

You make a film about it. That’s how.

“Lemonade: Detroit” is “a film about the disarming resilience of a city that can no longer rely on a single industry for its livelihood, and the entrepreneurial strengths of those who are reinventing themselves and their communities. Instead of sensationalizing blight, ‘Lemonade, Detroit’ will sensationalize hope, told through the intensely personal stories of people who are actively changing their city.”

I had to quote all of that from the movie’s site because there is simply no way that I could have phrased it any better. And Proulx, who’s donning the hats of Director, Producer and Writer, is also the mastermind behind “Lemonade.” (An “inspirational film about 16 advertising professionals who lost their jobs and found their calling, encouraging people to listen to that little voice inside their head that asks, “What if?”).  So he has the goods to deliver another great film.

And even though this amazing project is currently in development, you can already watch the trailer here:

Inspired? I thought so. Now hold on to your seat, bucko. This whole story is about to get even better.

But more importantly, for $1.00, you can contribute a great cause.

You can also contribute more than a $1.00, of course. They’ve cleverly set up four different tiers of “Rewards” which include gifts such as a copy of “your” film clip, a red carpet event invite, movie poster and much more.

Even cooler, you’ll also receive your “frame” highlighted on the fundraising site’s film strip, along with any words that you’d like to pass along. 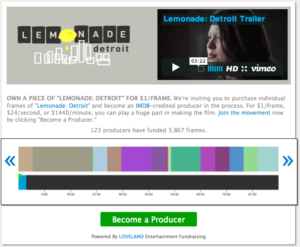 Independent filmmakers are always plagued by the step of funding their project. So it’s freakin’ genius to raise money with a unique and simple fundraising technique that  plays to both the narcissist and philanthropist in us all.

So please leave this blog, buy a frame and become a film producer.

You heard me. Leave this blog now and help bring hope and inspiration to the city of Detroit.