Bring up a new TV commercial on any given day at an ad agency and you’re likely to launch into a lengthy debate over whether or not it’s good or a complete waste of money. So, when we asked around Current360 for opinions on McDonald’s new – yet already heavily debated – spot entitled Signs, the results were varied. The ad debuted to big audiences during the recent NFL playoffs and Golden Globes, and it features a montage of signs outside McDonald’s restaurants. These signs include messages of varying emotional pull, from those of community support to words of encouragement after devastating events.
https://www.youtube.com/watch?v=93KTpF9JDWo
After the spot aired, social media reactions were wide spread. A quick search for McDonald’s revealed polarized opinions, as people either loved it or hated it for a multitude of reasons.
Some took aim at the living wage debate, while others attacked it for being a weak attempt at showing how much they care about its community. Others praised it for the emotional factor. So I was interested to see what a bunch of advertising folks would think.
I’ll start with my opinion.
I like the spot. I’m not a McDonald’s consumer, by any means. Those of you who know me know I enjoy – ok, really enjoy – local dining. But I’m the exception, as the vast majority of Americans frequent fast food chains.
I’ve also driven over 6,000 miles in the past 3 months, crisscrossing Small Town USA, where the only restaurant options are often a McDonald’s and a local diner. Many of us have friends who grew up in these small towns. Some of their parents own or operate a McDonald’s. And we know people who worked there in high school or college. Those are real people with real community ties to McDonald’s.
Sure, McDonald’s certainly has its issues. I don’t agree with their stance on many a thing. But I don’t hate them.
I can recall that feeling of relief when they were one of the first places to open after a devastating hurricane, offering a sense of normalcy and support to the community when it was desperately needed. McDonald’s provided a sense that things were going to be ok. That was real emotion and, for me, it came flooding back with this spot. But enough about my opinion, let’s move on to the rest of our staff.
We asked the employees of Current360 for their opinions, and here’s a breakdown of those responses. 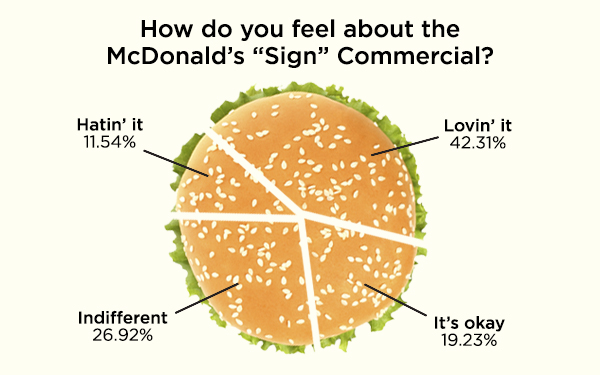 Lovin’ It
“I thought it was refreshing to show that even large brands like McDonald’s care.”
“It’s a feel good spot, which makes it shareable, and focuses on brand feeling. It’s memorable, and it positions each store as a local market business with ties to the community.”
“Our daughter loved it, too, and insisted that we watch it last night. She is a 30-year-old digital ad salesperson. I thought it demonstrated community concern in a real way and liked the local angle.”
“I think McD has done a nice job of presenting a positive message in a way that connects emotionally with their audience. Being from a small town, I can remember how the McDonald’s sign was a highly effective vehicle to announce a birth, wish someone a happy 50th birthday or say good luck to the local little league team before they headed off to play in the regional semi-finals. This spot took me back to those moments, and conveyed that same sense of community in the face of large-scale events and tragedies.”
“The folks who work at McDonald’s are a part of the community in which they live. This commercial celebrates those individuals and connects with all but the most cynical. Unfortunately, social media is the haven of the most snarky and has given voice to those we would otherwise eagerly ignore.”
“Love that the messages are personal to the towns where they’re located. Although it’s a worldwide chain, personalization makes it feel local.”
“Never eat the stuff, but I don’t judge those who do. What’s all the flack about? Smells like good ol’ American Capitalism to me. If you have a problem with that, I have one question for you: Why do you hate America?”
“Love this! They are projecting that McDonald’s isn’t just selling food, they are selling stories, feelings and real life situations. This commercial is being talked about, so I’d say they obviously did something right.”
It’s Okay
“McDonald’s is obviously conducting a branding campaign since there were no price points in the spot. Using the iconic sign as the hero is a great execution, but I felt the background music provided a melancholy tone. Maybe I just didn’t follow the sense that McDonald’s has been with us in bad times – trapped miners, lost jobs in Toledo – and good times, too.”
“I like the animated spot running right now better. I think it gets the point across. The Sign commercial is a little more mature, but has the same message: Share the love. People just need to look at things through the eyes of kids and stop being so negative. Of course the spot has ulterior motives. That’s what commercials are.”
Indifferent
“It’s just a bunch of messages on McDonald’s signs. Does not make me like McDonald’s or want their food.”
“Seems pandering to me. Their signs make statements that any other company could make.”
“It’s an interesting approach, putting themselves as good community partners and tying themselves into the fabric of smaller communities. I felt like several of the signs were a bit much – 9/11, specifically. It will be interesting to see if it moves the needle and helps sell more burgers. I did check out their Tumblr page, so they at least got me there. I wonder how this plays out into the rest of their overall campaign.”
“Seems to fit in with their other commercials. Trying to make an emotional tie to their products. https://www.ispot.tv/ad/7Fav/mcdonalds-archenemies”
“I think the controversy probably stems from each person’s prejudices towards McDonald’s. My own personal slogan for McDonald’s is ‘Not even with someone else’s mouth,’ so I don’t care for their spot. But I don’t care for any of their spots. The problem I see with this commercial is not that it is necessarily exploiting tragedy, but that it’s a humble brag. If you go around saying, ‘I am a really caring, humble person,’ you probably aren’t. And what’s worse, McDonald’s is a corporation that – at the end of the day – sells unhealthy, crappy tasting food and everyone knows it. The franchise owners may very well be caring, humble people, but I doubt many people know that most McDonald’s are locally owned and operated. So the perception is that the corporation is trying to take credit for things it shouldn’t, and it comes across as callow and manipulative. And, while one might argue that all advertising is manipulative, effective advertising manipulates without seeming to. Once you notice it, it becomes way less effective.”
“I love the song they play and have good memories connected to that, so it made the experience better. It was a very sweet commercial. However, seems more like a small town thing. Living in Louisville, I’ve never seen any customized signs like that at a McDonald’s, and all my experiences there are short and don’t really give me my own little story.”
“I get that all the McDonald’s franchises are part of the community, but if they’re really concerned with the community, why don’t they provide healthy food? Not just ‘healthier’ options, but healthy, clean food.”
Hatin’ It
“It strikes me as somewhat disingenuous and exploitative that McDonald’s, at the corporate level, would co-opt those obviously grass-roots efforts and local sentiments as their own for the sake of branding.”
“Is this appropriate? On one hand, like it or not, the golden arches have become an American icon. On the other hand, it feels more than a bit manipulative and tone deaf to use national tragedies to sell hamburgers. Not to mention self-important and myopic. Executionally, not a lot of subtlety here either. And the corny children’s choir was the final straw. Sorry, I’m hatin’ it. (Love the rest of the campaign however.)”
Now we’ve spoken our peace about it. What say you?