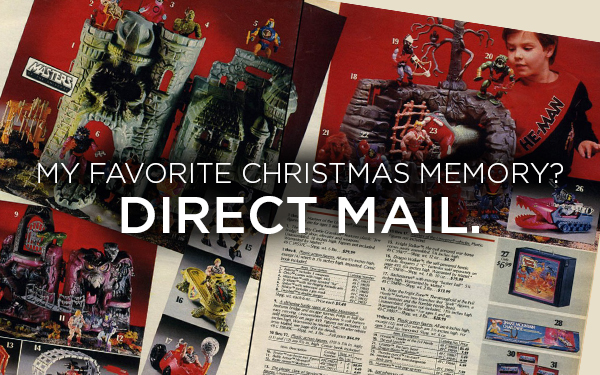 Where I grew up, we didn’t have shopping malls. At least not close enough to visit more than once a year. And those trips were usually dedicated to picking out school clothes or selecting a new piece of furniture for the den. Not exactly the ideal way for a seven-year-old to spend his day. In exchange for being on my best behavior (i.e., keeping my hands out of the wishing fountain or not asking Dad too many questions when we wandered past Spencer’s gifts), I would be rewarded with a 10-minute visit to the toy store before we headed home. This was an incredibly effective form of bribery, considering the impact those 600 seconds would have on my yearly letter to Santa. The mall’s toy store had inventory that my local department store could only dream about. Sorry K-mart, you were simply no match for Children’s Palace. This was heaven with halogen lighting.

But my life forever changed one mid-November day. A routine stroll to the mailbox yielded the typical bills and sweepstakes entries…except for one heavy, rectangular mass tightly wrapped in cellophane. Is it the P volume of my Encyclopedia Britannica collection? That definitely would have helped with my paper on photosynthesis last week. No, this was something different. I ripped through the translucent binding to reveal an image of an ecstatic child opening a present filled with light. In the upper corner were the most honest words I had ever read, “Wish Book ’85.”

The Sears Wish Book was roughly a trillion pages and included every possible toy in the universe. I honestly believed that. And for a few precious weeks before Christmas, I would not let the book out of my sight. The days of the 10-minute toy store sprint were done. I could now weigh every possible option at my own leisure, without the worry of overlooking a single Decepticon. The once crisp pages became tattered and torn. Corners were dog-eared. SKUs were memorized. He-Man figures were circled, crossed out, then circled again in red ink. In the end, the book was a mere shadow of its former self. But the resulting letter to Santa was the most comprehensive piece of correspondence I had ever crafted. As I placed a stamp on the envelope that read “North Pole” (followed by my grandmother’s address…can’t believe I was learning about photosynthesis, but didn’t realize Santa and I shared the same ZIP code), I knew that my work was complete.

For the next few years, the Sears Wish Book Watch became an annual tradition in my home. And no one was more excited to see it arrive than our mailman, who would begin avoiding me and my curiosities about catalog shipping procedures well before the leaves started to change.

Sadly, the Wish Book could not avoid the inevitable and was overtaken by progress. Several new malls began to pop up around my town, including one with our very own Children’s Palace. Big box stores stole market share from Sears, and the extensive four-color catalog was significantly downsized. Then, the convenience of the internet finished off the Wish Book experience once and for all. But every year around this time, as I thumb through each day’s stack of bills and sweepstakes entries, I remember the pure excitement of an unopened Sears Wish Book…filled cover to cover with hope and joy and Voltron figurines.