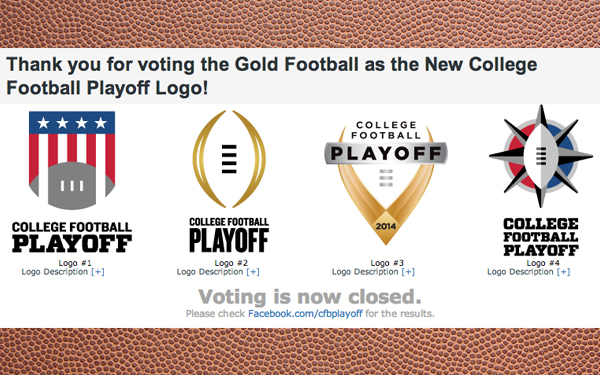 Our long national nightmare is over. The broken system that was the BCS has made way for a 4 team playoff in college football. And along with the new playoff system comes a marketing and branding program that I would imagine took months and cost millions. And in the end, the logo designers, Premier Sports Management, decided to hold a national vote to pick the new logo.

I’ll spare you the suspense and tell you that logo #2 was the eventual winner. And while I’ll be the first to admit that logo design isn’t my strongest skill, I have to say I’m not sure what they were going for here. I don’t know that any of the 4 were really strong candidates, but this is proof that if you give the client choices, they will always pick the worst option.

So was this an effort to offer up vanilla choices that can be enhanced as the playoff system grows and an eventual corporate sponsor is added? Let’s hope so.