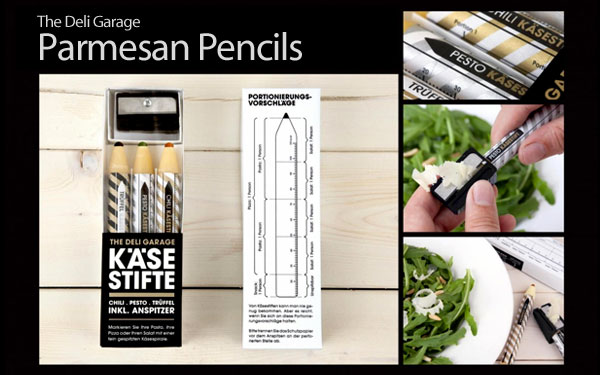 If you were charged with the task of helping a cheese brand stand out from all the other cheeses, what would be your first thought?

I go for the first impression. The packaging consumers see on the shelf has to be different in order to stand out from the masses.

The German advertising Agency, Kolle Rebbe had the same thought and put it to use for their Client, The Deli Garage.

The Deli Garage wanted a creative way to package their three different types of Parmesan cheese and also allow a user-friendly function for the consumer. Kolle Rebbe took that information and developed Cheese Pencils.

The cheese is packaged to look like oversized pencils in a pencil box, where the “lead” of the three different pencils is a different flavor of Parmesan cheese — truffles, pesto and chili. The concept is completed by a cheese grater designed to look like pencil sharpener.

The back of the box offers serving suggestions and even lists calorie information that correlates to how much of the “pencil” is sharpened (think butter packaging).

Pencils in the cheese aisle? That would grab my attention! I’m not sure if it would be something I would want to purchase though; thinking of my cheese as lead isn’t really appetizing but I would probably chuckle at the idea. I guess I’m not who Kolle Rebbe was targeting, though. The limited run of these pencils more than made consumers chuckle, the 500 sets sold out in just two weeks.

How would you react to seeing such unexpected packaging? Would it interest you or turn you on to something more traditional?