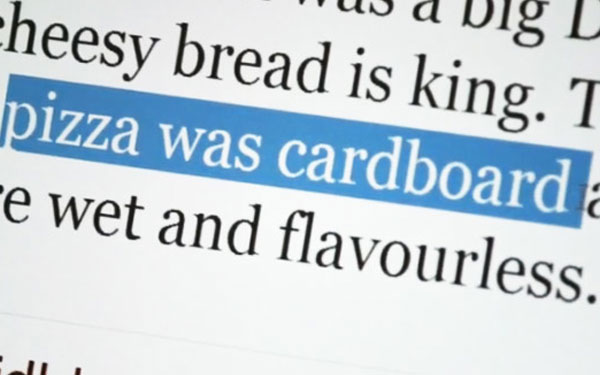 Domino’s “Oh Yes We Did” campaign, which consisted of admitting their old recipe pizzas weren’t any good and introducing new ones, has received both praise and criticism.

Only time will tell if the campaign was a success and destined for case-study greatness, but at nearly a year old, it’s still making quite a buzz.

Most companies believe they know what their customers are saying about their product.  But I ‘m afraid, more often than not, they only think they know.  In fact, I believe that until the unvarnished truth of the pre-campaign research was presented to the Domino’s top brass, they were still toeing the company line and espousing the tastiness of their old recipe.  Once confronted with the truth, they were faced with a choice: continue the same tactics and expect different results, or do something totally different and expect radically different results.

The campaign they were about to launch caused Domino’s marketers plenty of nervousness and unease, not to mention a fair amount of oh-my-gosh-what-if-this-doesn’t-work moments.  Speaking at Ad Age’s 2010 IDEA Conference, Russell Weiner, Domino’s chief marketing officer, said “you can’t imagine the sleepless nights and Alka-Selzer consumed when Crispin showed us a storyboard. You’re a 50-year-old pizza company with 5,000 stores out there, these guys first tell you to go on air and say your pizza sucks, and then go out there and show how crappy it’s made,” he said.

It was a gamble that, so far, seems to be paying off — Domino’s same-store sales are up consistently this year, including a  third-quarter bump of 11.7%.   I’d bet Domino’s decision makers are resting a little easier these days as they gear up for the next big campaign.  But in the wake of Domino’s success with this marketing strategy, other companies will try to mimic their success.

The key to making a radical authenticity strategy work for your company is to tell a compelling, true story that resonates with your customers.  Easy, right?  Actually, no. Smart marketing isn’t created in a vacuum.  It has to be informed by, and infused with, truth from your customers.  These days, it’s easier than ever to hear what your customers are saying, if you take the time to really listen.  Knowing where, when and how to listen is the challenge for today’s marketers.  We’re up to that task….are you?