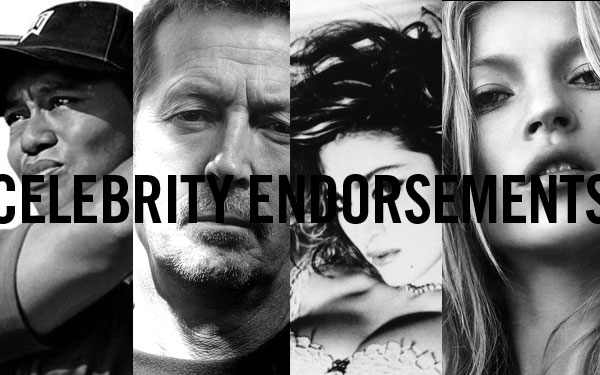 I’ve been thinking about that now-famous line from Michael Jordan this week, since I’ve spent quite a bit of time ruminating on the subject of celebrity endorsements. It was this article from The Independent that got me going. It’s a piece on the subject of “disgrace insurance”, a product created for advertisers for those times — and they seem to be increasingly frequent — when celebrity endorsers fail to live up to expectations.

With it, advertisers can recoup some of the losses they incur when they’re forced to scrap an expensive ad campaign. Of course there’s no amount of money that can make up for the lost brand equity, but that’s a subject for another day. For now I thought it might be fun to run down a list of some of the more memorable celebrity endorsement disasters.

Tiger Woods — of course — whose string of infidelities cost him the backing of AT&T, Accenture and Gatorade.

James Garner, who spoke on behalf of the Beef Council until he underwent a very well-publicized triple bypass.

Eric Clapton’s music and image were used in a string of Michelob ads, until he admitted in Rolling Stone that he was an alcoholic.

Madonna had a multi-million dollar endorsement deal from Pepsi until the video for Like a Prayer came out and outraged Catholics the world over.

Sharon Stone pontificated that a deadly earthquake in China was caused by bad karma that resulted from the oppression of Tibet. Bye-bye Christian Dior.

Bill Maher called Americans cowards after the US launched a cruise missile attack in the aftermath of 9/11. Sears and Federal Express were not amused, and pulled their advertising from Politically Incorrect.

Kate Moss was dropped by Chanel and Burberry after she was caught on film snorting cocaine (Yves Saint Laurent and Gucci kept her).

Michael Phelps, on a similar note, lost the sponsorship of Kellogg’s after he was photographed smoking pot.

How come Snap, Crackle and Pop never seem to get into that kind of trouble? Oh, I remember: they’re imaginary. Anyway, based on all that, you might assume that celebrities — living in their fame cocoons — don’t consider the impact their day-to-day actions have on the companies who support their lavish lifestyles. You’d be largely correct in that assumption.

However there are always one or two celebrities who manage to grasp that their actions have an impact on their financial futures, and by extension the futures of the companies that underwrite them. Michael Jordan was/is such a person, which is why, when asked why he didn’t publicly endorse the Democratic candidate running against Jesse Helms in North Carolina, he said…