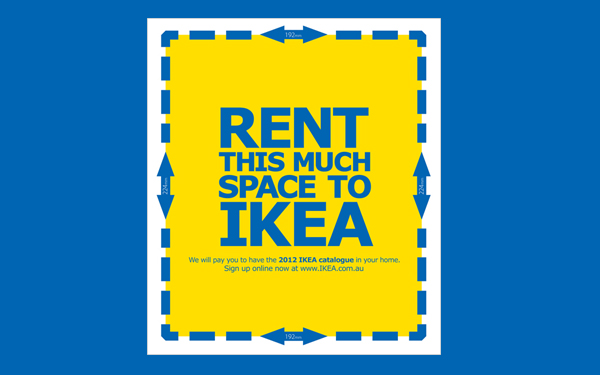 If you remember, I wrote a blog about a month ago about an online web banner that IKEA had created. The web banner housed more than 2,800 items for purchase all in a very small square. They boast that they create furniture and other items to maximize space and de-clutter life. As I’ve mentioned before, they have taken this approach to their advertising as well.

IKEA has created another genius (in my opinion) campaign. This time they have advertised that they would pay people to keep the 2012 IKEA catalog in their home. Research showed that thousands of people would throw away their catalog shortly after receiving it and IKEA wanted to change this. Their advertising “call to action” was to give their catalog a home and in return they would send you a “rent check” in the mail.

The company ended up mailing out about $2 million dollars in “rent checks” for IKEA but gained a $14 million dollar profit during the first week of the campaign. Those who received the “rent checks” went into the store to spend their giftcard, which is exactly what IKEA wanted. I think that this was a great way to engage consumers. Click this link to watch the case study and be amazed.