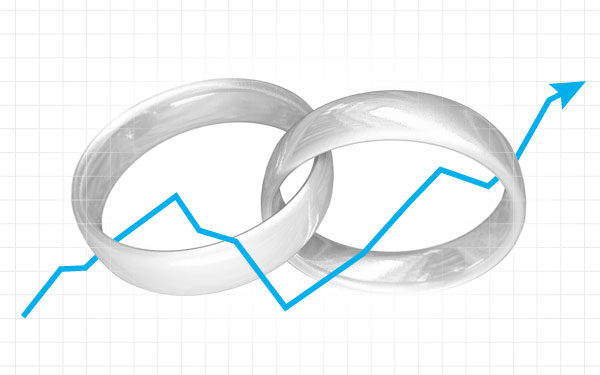 Wedding season is upon us. The April showers, or floods for some of us, have led to a boom of proposals and forthcoming wedding ceremonies around the world. You might have heard something about a certain William and Kate getting hitched across the pond earlier this month.

This wedding boom has stretched all the way from Buckingham Palace to CurrentMarketing. Three of our best and brightest, including the boss’s daughter will be saying “I do” this summer. So before I go any further, a big congrats to our own Arica Fessel, Lindsay Trombatore, Meredith Will and Sarah Schardein. I wish all of you the best of luck and many years of happiness.

My interest in this wedding boom stems from the fact that I will be attending seven weddings this year. Yes, you heard right – seven. It appears that most of my college friends, coworkers and high school classmates have decided that 2011 is their year for love. For me, that means busting open my piggy bank for wedding gifts and penguin suits.

While I am happy for all my friends as they start this new chapter in their lives, the researcher in me wonders how is this possible? Has there been a recent demographic, psychographic, socioeconomic trend that has lead to a modern wedding craze and perhaps a forthcoming baby boom? And if so, what does this new trend mean for us as marketers?

So that’s exactly what I did. I put my research cap on and started crunching the numbers. And wouldn’t you know it, the data shows the opposite effect. The average median age of first marriages in the United States has been steadily increasing since the mid 1960s. Meanwhile, the number of marriages in the U.S. has been declining for the past 40 years.

What I did discover, however, is that marriage trends vary significantly by region and state. For example, men and women in Oklahoma and Arkansas tend to marry much earlier than Massachusetts and New York. And coincidentally, states in the midwest and mountain regions have marriage rates that are significantly above the national average. In fact, Kentucky ranks among the youngest of states for marriage with an average median age of 26, which is significantly younger than the US average. Local psychographics clearly play a much larger role in marriage than most marketers originally thought.

So how do I explain my situation? Seven marriages in one year? Well, the data has an answer for that too. According to the American Community Survey, for the first time in US history, college graduates are more likely than young adults without college degrees to be married by the age of 30. In 1990, for example, 75% of all 30-year-olds who did not have a college degree were married or had been married, compared with just 69% of those with a college degree. Among the possible explanations for this change are the shift in economic fortunes of young men without a college degree and their increasing tendency to cohabit with a partner rather than marry. And sure enough, either the bride or groom in each of the weddings I will be attending have a college degree and are also under the age of 30.

So what does all this data mean for us as marketers? The immediate effect is a shift in the general stereotypes associated with millennial marketing. The “me” generation is quickly become the “we” generation. Messages of independence will no longer resonate as well as they once had. Instead, marketers should position products as functional, progressive and on value. Not that value in this context does not mean cheap. This generation will not change its core beliefs, but will look products that provide benefits to both them and their partner. Perhaps luxury brands should consider bundling products. For example, buy one pair of Ray Ban sunglasses, and the second pair is half off.

Looking ahead to the next decade, what can we expect? As a researcher, it’s my jobs to say, “Lets wait and see.” But my hunch is that this trend will continue, and not just for college grads. As the economy still struggles, I believe folks will continue to marry younger, regardless of educational attainment. Marriage provides socioeconomic security, which is invaluable at a time of national economic crisis. And the culmination of these events might just lead to a second baby boom in this country. Either way, marketers must remain constantly aware of these trends as family dynamics are probably one of the most important factors when considering purchasing products and services.

But with all that being said,  I was just happy that I was able to answer my questions. Turns out, it’s just that all my friends happen to be college graduates who live in the Midwest. And according to the data, these are the ideal conditions for a wedding boom.

Just don’t expect this researcher and bachelor to be heading to the alter anytime soon.