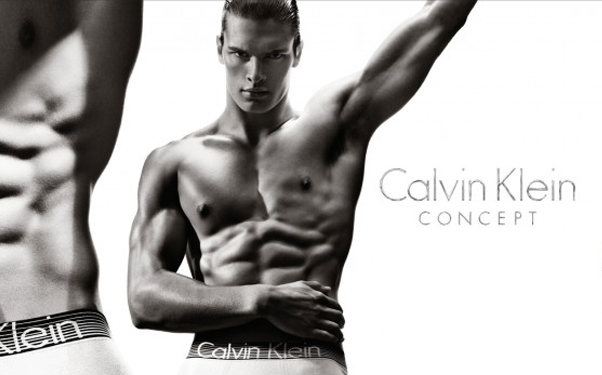 I want to start out by apologizing for this blog post. While doing research for this incredibly difficult topic, my boss walked up behind my computer and asked me what I was doing. Did I mention I was going through all the sexy Super Bowl ads at the time? Yep. The new, male Calvin Klein model was all over my desktop screen. Needless to say, I was a little embarrassed.  But, hey! Who else is brave enough to cover this topic? No one.

Anyway, Sunday night was the Super Bowl. And with this so-called  “super” bowl, came many new commercials. Some clever. Some cute. Some are even pretty stupid (shocker). But oddly enough the commercials that sparked my attention weren’t the ones with the cute baby Clydesdale, but the ones with the super hot dudes.  This isn’t a new concept for Super Bowl ads, and definitely not new in the world of advertising.  But I have to ask, does sex sell? Do consumers immediately run out and buy a product just because a hot model or actor is seen in the advertisement?

A company might think there is no better way to sell a product than having some hunky gardener holding up a can of soda, take off his sweaty shirt and then take a nice, long refreshing drink (I’m talking to you, Diet Coke). This may be easy on the eyes for some, but does the gimmick work? Do sales go through the roof? Not always.

An April 2012 article for Business Insider states that for the many products that are not related to sex, using sex to sell them doesn’t work. It can even backfire. A recent University of Wisconsin study shows that audiences view ads 10 percent less favorably if they use sex to sell un-sexy products. This study agrees with the data David Ogilvy gathered over his long career in advertising. In his book Ogilvy on Advertising, he says that sex sells only if it is relevant to the subject being sold. Obviously. But for some, this is a way to get attention. Good or bad.

The Go Daddy commercial had super model Bar Rafaeli making out with a random nerd to promote… well, I’m not really sure. Something about being smart and sexy? More like weird and unnecessary. Yep. It has even been called “sexist” by some since its airing during the Super Bowl. You can watch it here.

Greg DiNoto, chief creative officer at Deutsch New York, which partnered with Go Daddy says, “We understand that a spot like this will be polarizing and controversial. There are others that find it silly. But everyone finds it memorable- and that’s important.” He goes on to explain that the agency was just working with Go Daddy’s pre-existing sexy image. Ugh. Whatever you say, dude.

And as far as the Calvin Klein commercial goes, well, they sell underwear, so they get a pass on this one. At least it was artistic. Yes, very artistic. Watch it here.

Bottom line is: If you’re a small business or just starting out, don’t hire some sexy young thing to sell your product. It doesn’t work. And it often overshadows your product, which, I’m assuming, you’re trying to sell. Heck, if you’re a huge, international brand don’t do it.