A few days ago I came across an old skateboard in my brother-in-law’s basement. The first thing I did was take it out to the cul-de-sac out front and ride it around in the street. I will admit, my skate skills have left the building over the years. However, I am proud that I didn’t hurt myself, but came very close a couple times. After the ride, Jamie (my brother-in law) and I started talking about the old boards we used to own and how cool the graphics were back then. This made me realize how much of an influence skateboard art from the 80’s had on me as an artist.

I think I was in the third grade when I realized I had a talent for creating art. Like most kids I was trying to draw comic books and anything I thought looked cool at the time. Copying images out of magazines and books onto lined notebook paper was common. What I remember most is drawing some of the skateboard artwork from skate decks, stickers and t-shirts. As I searched the internet for old skateboard artwork, I realized that most of my favorite graphics were created by Vernon Courtlandt and Jim Phillips. Both started illustrating in the 1960’s in California. Jim became art director for Santa Cruz Skateboards and Vernon illustrated countless iconic designs for Powell-Peralta.

Both artist had their distinct styles, but Vernon’s graphics were my favorite. I couldn’t tell you how many times I attempted to draw the Tony Hawk skull logo or the Powell-Peralta dragon or decorated my notebooks and Trapper Keeper with the rat bones logo. These illustrations inspired me to want to be creative and helped push my skills as an artist.

Trying to recreate some of Vernon’s illustrations taught me about using hatching and cross hatching as well as perfecting the art of drawing skulls. Much to my mom’s displeasure, that was probably my most frequent doodle between third and fourth grade. I can remember going to Pro Quality Skates on Bardstown road looking through and buying stickers on a weekly basis. Most of which were never stuck on anything so I could carry them around with me in my sketch books. I guess this was my first taste of graphic design. 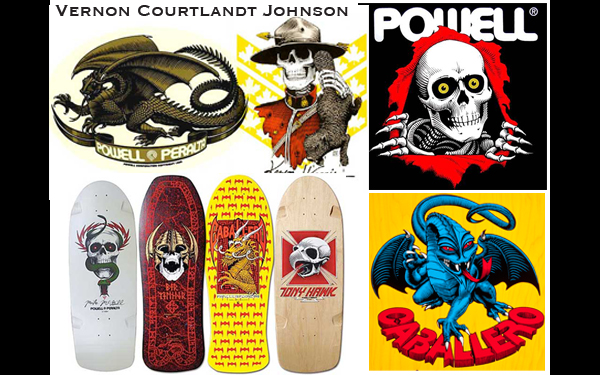