Smartphone ads for your ears, not your eyes

Home / Technology / Smartphone ads for your ears, not your eyes 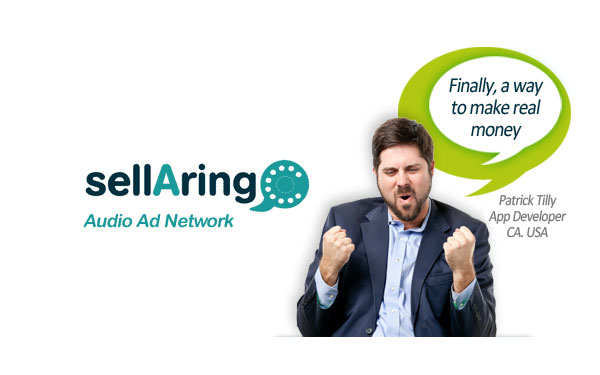 All smartphone users have seen them – the annoying ads that clutter the apps we use. But with most smartphone ads being ignored by users, the ROI for advertisers isn’t great. When apps aren’t as interesting as they once were to the user, they stop using it altogether, then the ads are not being seen at all. ROI goes from not great to none existent.

In an effort to solve this predicament and tap into unclaimed advertising territory, a company called sellAring® has developed a solution to those often ignored smartphone app ads.

The user downloads an app the Agency developed – the Agency lists the app as “free”, but only if the user agrees to sellAring terms and conditions. These terms and conditions:  listening to an occasional ad, placed by sellAiring, in the short time between the moment a call is placed and the person on the other end answers. Instead of the traditional ringback tone, a targeted ad is delivered. Users are paying attention to the call — Is it going through?  Is it going to be busy? ‘Gosh, it’s taking awhile for Jane to answer my call’ — thus paying attention to the ad.

Those short seconds we wait for a call to be answered don’t seem very important individually, but think about how much time we waste waiting on calls to be answered when you put it all together. According to calculations done by sellAring’s inventor, Zohar Halachmi, it’s about 30 hours a year! Those wasted, unclaimed hours become precious moments for advertisers to reach their target audience.

The best part for advertisers? Even if the smartphone user stops using the free app they downloaded, sellAiring continues to deliver ads when calls are made.  And for the developers, the app is launched as it was originally designed — no banner ads to clutter the hard work that has been put into it.