Thanks for the memories, Warren!

Home / Culture / Thanks for the memories, Warren! 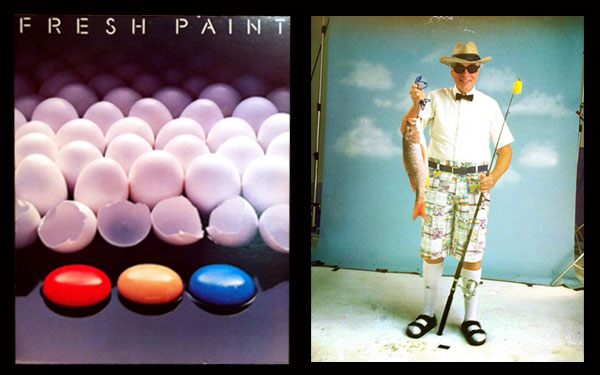 Warren Lynch, a Louisville photography legend, officially retires today. Many of us at CurrentMarketing have had the pleasure of working with Warren over his long career of making beautiful images for advertising and marketing purposes.

We wish Warren the best as he enjoys a new chapter in his life: retirement.

Warren –
Thanks for all the great work you have done for us, and others in our community. Your attention to detail, expert lighting and laid-back attitude will be missed.

In the spirit of fun, we asked Warren a few questions as a tribute:

CM: What’s the strangest thing you have ever been asked to shoot?
WL: I am going to say it was the monkey jumping up and down on a mattress. Somehow, at the time it looked like a normal thing to do. I have no idea what the reason was..I think the drugs the AD’s were using were more interesting in those days.

CM: Were you always the one behind the camera at all the family holidays?
WL: I was, until the time I was shooting a nephew’s wedding, but I had a little too much punch and the pictures got more and more ‘artistic’ as the evening wore on. The last few rolls disappeared and I was never asked to do another wedding for free!

CM: After spending all this time shooting commercially, do you ever shoot just for fun?
WL: I do a lot of amateur shooting for fun. I have always been interested in astrophotography. You know where you strap a camera to a telescope, and stay up all night waiting for certain stars and such. I can already see this getting out of hand and costing a lot of money.

CM: What’s the worse crime against photography: Sears Portrait Studios or Glamour Shots?
WL: Since those places are not in the same business I am in, I think they are a great way to separate people from their money, thereby helping the overall economy. I do think if you pay money and you feel you got ‘ripped off,’ it makes you think and appreciate good or interesting photography.

CM: Photoshop: “Takes the art and skill out of what I do” or “Makes my life 1000X easier”
WL: Sort of a mixed emotion here. A little of both. I remember times before Photoshop and it did not stop people from insisting on trying to do impossible layouts,(see answer 1 about good drugs.), like flying chicken wings. Somehow we would get something on film that somebody would spend weeks on putting together some how with scissors and glue. Sometimes no matter how much skill or art you pump into a shot it still looked…how should I gently say this…CRAPPY!

So the photo Saints looked down and said we need to help these people. Poof–Photoshop was invented. So crappy just gets done a lot faster. When we first got into Photoshop we would say we can fix it in Photoshop and found we were volunteering to do a lot of editing that should have been fixed on camera. So now we always say “you can fix it in Photoshop.” Because every agency or studio has an expert on staff, which can be good or bad. I still feel a photographer needs some Photoshop skills but to be a Photoshop expert you really need to spend most of your time editing and then are you an editor or photographer.

CM: What’s the farthest you have ever traveled to shoot?
WL: I went to LaGrange to shoot a bull. No kidding this was a big ass bull and they did ads for you know, artificial cow stuff. I had to shoot through a fence because the week before he put one of “the hands” in the hospital. So LaGrange is my answer. Which is sort of exotic with that whole ‘La’ and then ‘Grange’ spelling.

CM: What was your first camera?
WL: Cameras are like tools. They are a means to get your work done…which means I can’t remember…OK I am old and my memory only goes back to the 60’s.

Got any easier questions?

CM: What’s your favorite shot you’ve ever taken?
WL: Of course, FRESH PAINT. Julius Friedman came to me with the shot he had somebody else attempt before. So I was 2nd string and did it and thought it was fun and all. Julius put the finishing touches on at the printer with making the eggs red and blue. This was before Photoshop so Julius would camp at the printers until they did what he wanted. So when he showed it to me I thought it was “good” but when it got into National Museum poster collection and won about a kazillian awards, I thought it became great. GREAT ART!!

CM: Smartphone cameras: good, bad or ugly
WL: Greatest invention since girls. I used mine recently to do some interesting furniture pictures. I just wish all this technology was invented 30 year ago when I was just getting into the business. I love the artist that does his art on his iPhone (in bed) then emails it to the gallery where he has 20 phones hanging and each day…new art. That is art. Also we will be using the iPhone at our open house as a means of communication so I don’t have to talk to anybody.

CM: Digital versus film?
WL: I could not wait ‘til film died because of the water pollution it caused during process. I think art wise it was a much cooler medium but commercially digital has been great. After getting use to the digital process there is no comparison. I love it.

CM: Who was the best ping pong player you faced over the years?
WL: Some smart-ass kid AD came in and had never played ping pong and after a few minutes I could not return a serve and he could send everything back. He was a natural athlete so I never invited him back. Asshole.

CM: How many Hawaiian shirts do you own?
WL: Are you asking this because you think I am cool or funny looking? I think I look very cool in Hawaiian shirts. Which of your people asked that question? It’s not polite to make fun of old men and their attire. Hummmmph.

CM: What was the best or favorite thing you shot that was never used by the client/agency?
WL: Of course every photographer at some time in his career thinks he has a better idea than the client. So I have done extra pictures that I thought were better for the job. Most clients are polite and would say ‘we will run it by them’ which is code for ‘that sucks.’ More assholes!
Well, the weirdest thing was, we shot for 3 months for an unnamed local appliance manufacturing company, and they wanted everything black and white because of budget cutting, but during the time we started shooting and final printing they decided color was better and they found some money. So we reshot everything on a rush basis meaning we stayed up for several nights, charging OT to get the same work done again. Another example of why God invented digital.

CM: What’s the most bizarre thing you’ve put in the deep fryer and eaten?
WL: The tastiest were the valentine Sweet-Tarts. We first dipped them in fish batter and experimented with different times.  I think we were very, very bored. Nobody would try the rubber ducky, But, it looked delicious.

CM: You’ve done amazing work over the years, what is the worst thing (or project) you had to shoot?
WL: It’s all great and I loved every minute of it. (code for…I hate this shit) Especially when they pay me to do it. When I think in the middle of a shot, ‘I have done 10,000 times’ and then I think, ‘why am I doing this? Oh it’s my job!’ But some times I do wonder –when the final product is nothing but landfill in the end. Is that cynical enough for you? I got more. You know some of the things you would think would be bad sometime turned out the most fun because It was something you don’t do everyday. Like the time the pigs bit my hand. I didn’t know pigs bite. (State Fair poster, don’t ask.) Or one time I did some filming in New Mexico inside a tunnel they were digging to get water to an Indian reservation. It was dark, it was wet, it was filthy, and it was fun. We had a ball! Oh I said LaGrange was farthest, but I lied. Am I supposed to be telling the truth here? Oops.

CM: Besides photography (and occasionally ping pong) what talents do you have the most people don’t know about?
WL: I am a great fisher-person. Ask Jim Lindsey. I need more practice, which is on the agenda after I am outta here. Also I like to make tall grass short. I spend a lot of time doing that. I am also taking lessons on the Dobro, which I love but need a lot more time on it. I plan to be a bluegrass star in my next life.

We love you Warren! Thanks for all the great memories!!!