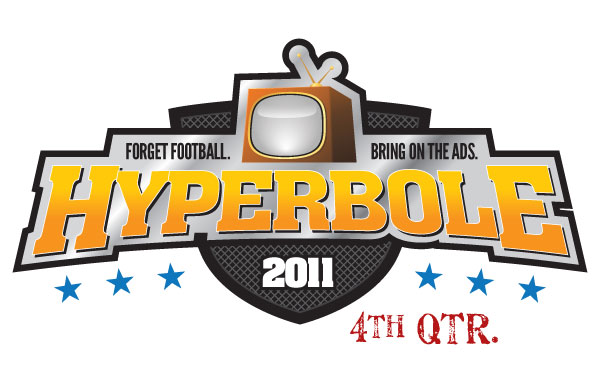 I’m pretty sure they saved all the stinkers for the 4th Quarter. Maybe they thought everyone would be too drunk by then to pay attention? Maybe I would have been more entertained if I had been drunk? Too late for that now, so let’s get started with the reviews so I can get my Glee on.

Bud Light – Dog Sitter
There always seem to be two common themes in Super Bowl commercials that I absolutely hate. Those would be talking babies and animals that take on human characteristics. Both are just creepy. I’m pretty sure I’ll have nightmares about this one.

Cars.com – The Reviews are in
Yes, the reviews are in and it’s not pretty. Talking cars, really? I don’t like it when people burp loudly, so I definitely don’t want to hear a car doing it. Talking inanimate objects aren’t quite as bad as talking babies or animals, but they came close with this one.

Pepsi Max – First Date
I actually kind of liked this one. Was it sexist? Maybe so, but not any more so than the dumb Go Daddy commercials. This was another amateur commercial that was a part of Pepsi Max’s “Crash the Super Bowl” contest. As a side note, I actually thought the amateur commercials were just as good, if not better than, the professional ones this year. Nick didn’t like the amateur shot Cheetos commercial with the sucking finger, but it cracked me up! In fact, at the party I was at they hit rewind on the DVR about 4 times to keep watching it.

Bridgestone – Carma
Yet another commercial with an animal that wants to act like a human. What is this one doing? Throwing up gang signs? If I was the guy in this one, I’d be running for my life. Creepy!

GoDaddy.com – The Contract
Don’t get me started on these GoDaddy.com commercials. I’m offended by the fact that they assume that everyone that needs website hosting is male. I feel the same way about beer commercials. I am a woman and I drink beer and I may happen to need a website one day. Can I get some love?

Limitless – Movie Trailer
Finally! The commercial gods decided to smile upon the ladies in the audience. Hello, Bradley Cooper! I didn’t comment on any other movie trailers, but this one had it all. Car chases, sex, money, a slammin’ Kanye West tune, Robert Deniro and did I mention Bradley Cooper? I’m sold! Can I buy my ticket now?

Sketchers – Break up 2 Shape Up
A sweaty, breathy Kim Kardashian dumps her trainer for her Sketchers. Oh, I get it. If I wear Sketchers Shape Ups, then I’ll have a butt like Kim Kardashian’s! Riiiight, and I guess you also expect me to believe that was really Joan River’s body in the GoDaddy.com commercials.

Well, that about does it. Mostly misses in the 4th quarter for me. Maybe I’m a tough cookie to impress? The have the largest audience all year, and they are spending millions of dollars for a 30 second spot. We mostly get the same thing year after year. I feel like these commercials should just flat out knock my socks off, but they didn’t. At least the 4th quarter was a great one as far as football goes. Congrats to the Packers!