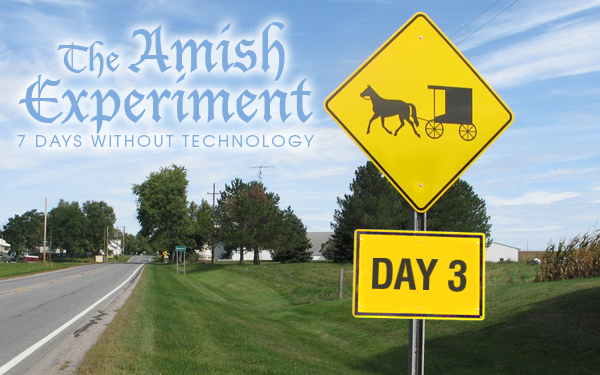 Because I’m not careful about what I say on this blog, I backed myself into a bit of a corner when I was challenged by our VP of Message Deployment to put up or shut up: spend the next 7 days without the joys of modern technology, and then write about it. No internet. No cable TV. No mp3s. No TiVo.  This was a bad idea.

After reading a few of these blogs my lovely wife asked if she could have a few minutes to air her side of the story. And since it gets me out of writing a blog today, I thought it was a GREAT idea.

Harrison Ford in Witness.  Randy Quaid in Kingpin.  They went full Amish.  My husband has gone Amish-Lite.  As an observer to his “Amish Experiment 2010,” I thought that I could add insights to his running blog.

Let me begin by confirming a few facts.  It is 100% true that I uttered the words, “I don’t think I need all that technology.”  I had never heard of TiVo and did not know of one other person who had it.  I could not imagine a world in which you watched television in anything but real time.  I know, I know… It is hard to believe that the wife of the first person in line to get an I-pad actually married a woman who taped her favorite programs and viewed them on a VCR up until a few years ago.

It is also factual that I said in the Apple store in front of a Mac sales team member, “I don’t need a new phone.  My phone works just fine.”  And to further add to his embarrassment, he had to track me down to come to the Apple store because I had wandered into the Von Maur “shoe room” where I was trying on all of the pretty, pretty pumps.  If there was an Apple Store Penalty Box, he would have sent me there to feel two minutes of shame for uttering such crazy talk in his beloved Apple store.  But there is more that he did not tell. When the iphone made its debut, Jimmy D had a Razor phone, which was the prior cellular epitome of technology.  When he got his iphone, he bequeathed me his Razor phone.  Within a few weeks, I actually took it to a Cingular store and asked if I could trade it in for a phone with less technology.  I just wanted the minimum bells and whistles.  I walked out with a small little flip phone which did very little other than make and receive calls and I was happy as a clam because the phone came in a fun color.

Not being able to plug into any of his techno-gadgets last night brought about an unexpected result during our pre-dinner nightly rituals.  What is he doing in the kitchen while I am trying to cook dinner?  This never happens.  Seriously, turn around and step away from the kitchen.  Now he will know that when I talk about making a homemade meal, it is actually Dawnspeak for microwaving and arranging microwaved ingredients onto a plate in a festive display that I refer to as “cooking.” He knew I used the microwave, but I do not think he realized the extent of my microwave-an-entire-meal skills.

But despite my general lack of excitement about any techno-gadgetry, I have discovered that I might be having a more difficult time with the experiment that my techno-focused husband.  Guess what I miss most of all…TiVo.  Although Jimmy D made sure to start this experiment after his beloved Yankees were out of the playoffs, he did not stop to think about the fact that this was my Project Runway finale week.

And the Amish-Lite experiment continues…as I am typing this, my husband is reading a book. He is not using a Kindle. He is reading an actual, bound and Dewey-decimiled book. No pictures or thought bubbles or anything. Will wonders never cease?  I am behind you 100% so long as I get a reprieve to watch the most important upcoming event on TV:  the Project Runway season finale.

Things I missed out on today: Thursday night TV, including The League and It’s Always Sunny in Philadelphia. My 13-year-old nephew keeps texting me, trying to get me to play Xbox with him.

Things I gained today: I broke out my guitar, which I haven’t tried to play since the Clinton administration. Still can’t play, but it was a fun diversion.