The old bait and switch? 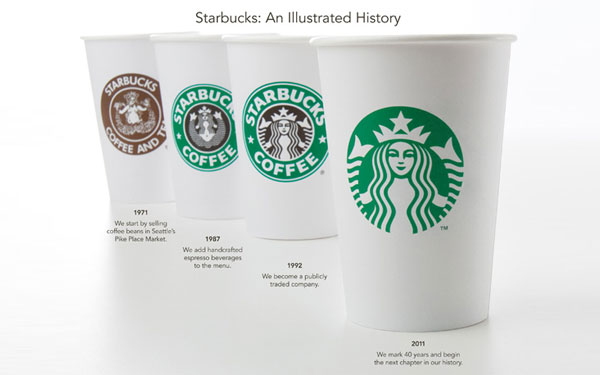 At the beginning of the year, the popular coffee chain Starbucks unleashed an updated logo to the world. The new logo isn’t a complete rebrand as Gap unsuccessfully attempted in late 2010, but it has undergone some major changes.

The logo previously featured an abstract lady (known by Starbucks fans as the Siren) encompassed by a green circle that contained the words “Starbucks Coffee.” The new branded mark has taken away all copy and leaves only the green Siren.

The former logo had been around since 1992 and this is the fourth change in the logo since Starbuck’s beginnings in 1971. However, all of the previous marks included the words “Starbucks Coffee” as a circular type treatment around an illustration.

Does the removal of any mention of Starbucks change the likelihood of recognition of the logo? One reason the coffee company decided to remove the type is because of a larger transition into reaching out to other countries where English isn’t the first language. In addition, they are diversifying – coffee will not be their only product.

Also under consideration was the fact that many of the local Starbucks stores will be completely un-branded.  For example, a location in Seattle is now called 15th Avenue Coffee and Tea and doesn’t contain any Starbucks branding. The company says they are doing this to other locations so the stores sound like more of a local hangout spot, rather than a hoity-toity coffee shop. Thus increasing the foot traffic to the stores.

I had to stop when I heard this. A Starbucks without branding? A different name? It sounds a little deceptive to me. As a person that tries to buy locally, I could potentially be giving my money to Starbucks and not even know it.

I’m very interested to see how this plays out in the future. Will the Siren alone hold up as the strong mark the previous logo was? And will the non-branded coffee shops increase foot traffic and sales? Or is it not the branding but perhaps the eight dollar frappe that continues to keep some consumers away?