Tintype photography is making a comeback 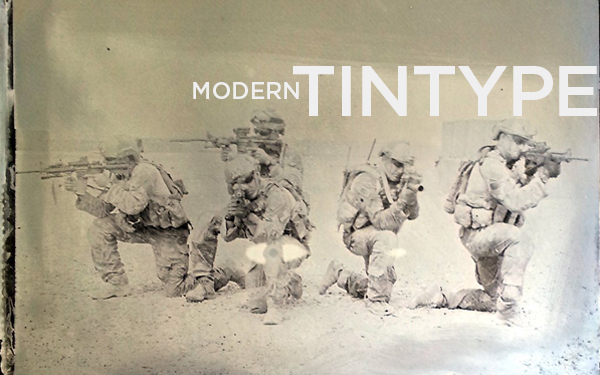 As the old song goes, “Everything Old is New Again,” even in this digital age.* With that in mind, I have discovered, while perusing the internet of course, that tintype photography is making a comeback, albeit a niche one.

To the uninitiated, tintype photos were invented in 1851 by Frederick Scott Archer and came into popularity during the Civil War, because they could be made quicker, easier and less expensively than a daguerrotype.  A tintype image is made directly to a metal plate placed in the camera. The plates are individually prepared and must be exposed and developed within minutes or they are ruined.

While researching the comeback, I found Staff Sargent Ed Drew, a soldier who served in Afghanistan. He is also a student at San Francisco Art Institute and he decided to take tintype photos during his last tour of duty.  He specifically took the tintype photos to preserve, for eternity practically, this period of his life for his newborn son. And for future generations, because tintypes can last for many years. Plus, he used the tintype photos for a class project.  His photos can be found here.

There is also a Photobooth tintype studio in San Francisco.They will create your tintype photo while you wait, using the same process originally developed in 1851.

But the real connection of old and new has been created by an online company that wants you to upload your digital photos and they will reproduce the photos using authentic tintype materials and process. They will reproduce pictures, of course, but they can also turn your photos into necklaces and cufflinks. This allows you to take your children, pet, or whatever you cherish with you wherever you go, yet sporting it with an antique feel.

I have tintype photos that were passed from my grandfather to me, through many generations. Perhaps I should go on Antiques Roadshow and discuss the material worth of my family treasure!

*Song was written by Peter Allen, sung in “All that Jazz” and “The Boy from Oz”, which is based on his life.