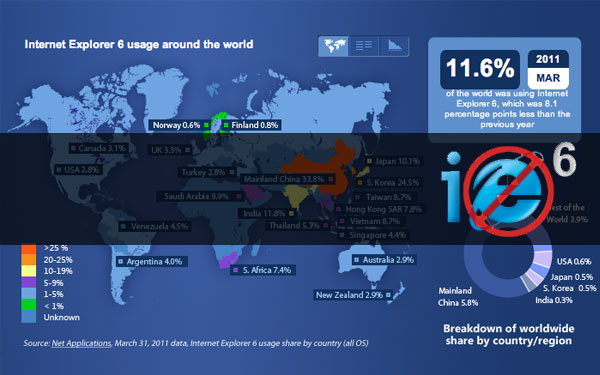 “The web has changed significantly over the past 10 years. The browser has evolved to adapt to new web technologies, and the latest versions of Internet Explorer help protect you from new attacks and threats.”

I could make my own personal list of reasons why I loathe this old, clunky browser – ie6countdown.com cites improved speed, better privacy settings and tabbed browsing. Hear, hear! I can’t live without tabbed browsing!

Even people running versions 7 & 8 should think about upgrading; IE9 just came out and it’s a vast improvement over any version of IE so far. Microsoft finally realizes they have some real competition in the space and consumers are becoming very savvy in choosing their browser vs. letting their operating system control how they surf the web.

According to Ie6countdown.com, the highest percentage of those still using IE6 is in Mainland China, representing an astonishing 5.9% of the world’s users. Currently, 12% of web users worldwide use IE6. The goal of the website is to reduce this down to 1%. Only 0.7% of total worldwide users are from the United States making 2.9% of US Internet users still on the old IE. It’s time to upgrade!

Overall, I think the website created by Microsoft was a great idea, and imperative to help speed up the process of getting IE6 updated so we can stop worrying about coding for a browser that was created in the 90’s. Check out the site and as Microsoft says: Friends don’t let friends use Internet Explorer 6!