Is this simply an event for retailers to sell stuff that looks O so appealing passing it in the aisle, and when will a bargain like this ever come along again? Well, it began in the South, and it actually had nothing to do with marketing… Not yet.

Christmas in July began 86 years ago on July 24th and 25th in 1933 at a girls’ camp called Keystone Camp in Brevard, North Carolina.

According to the camp’s 100th anniversary celebration book, the first time anyone celebrated “Christmas in July” was at Keystone, per the request of camp co-founder Fannie Holt.

Miss Fannie was a character, to say the least. She was a big-dreaming creative type which added uniqueness to the camp. Instead of junior and senior campers at Camp Keystone, they have Elves, Pixies, and Dryads.

The very first Christmas in July had carolers, a Christmas Tree, Santa Claus, presents, and even fake snow made of cotton. As the tradition evolved at Camp Keystone, campers would use laundry bags as makeshift stockings, which they placed outside their cabins to be filled with candy overnight.

Eventually, elves, reindeer, and Mrs. Claus came along with a camp-wide gift exchange with all of the counselors included. The gifts were always crafty and creative – in fact, one time the Camp Director’s father received a bejeweled toilet plunger decorated with feathers and glitter.

The tradition carries on today in the dead of summer, and now the campers simply go for a dip in the lake post-presents.

So, then the question remains – How did Christmas in July become such a significant marketing extravaganza? Well, the U.S. Post Office and U.S. Army and Navy officials, in conjunction with the American advertising and greeting card industries, threw a Christmas in July luncheon in New York in 1944 to promote an early Christmas mailing campaign for servicemen overseas during World War II. This campaign was so successful the luncheon was then repeated in 1945.

American advertisers soon caught on and began using Christmas in July themes in print for summertime sales as early as 1950. Now in the United States, Christmas in July is more often used as a marketing tool than an actual holiday – but you can still celebrate this holiday in your home with your loved ones as they did at Camp Keystone.

Or here’s a list of the best places for you to be in the USA for Christmas in July:

Top 10 Places in the US to Celebrate Christmas in July 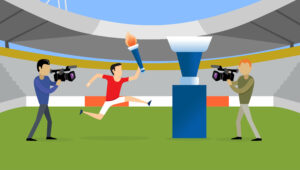 Poor Olympic Ratings and What They Mean for You

The grand spectacle of the sporting world — the Olympics — has, after a year of delay and confusing information, come and gone. But now

What’s The Best Time To Post on Social Media?

When it comes to using social media for the fabulous marketing tool that it is, understanding just when and how to craft your posts is