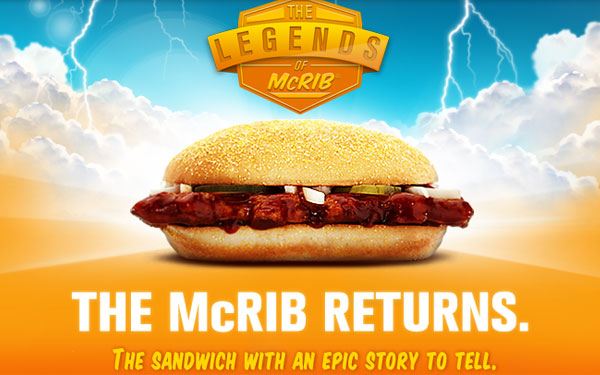 McDonalds has set off a fast food frenzy with the return of their McRib sandwich.  The popular sandwich usually appears on the menu in a variety of restaurant locations, at different times and never stays around very long. However, as of November 2, the McRib is being offered at most of the McDonald’s throughout the United States for just six weeks. This news has taken over many social networking sites, as McDonalds fans are McTweeting, McBlogging and McFacebooking in their McRib excitement.

What is this frenzy all about? I mean, the McRib sandwich isn’t even a rib sandwich at all – it’s a pressed pork sandwich molded into the shape of a stack of ribs. Can you say McNasty? Before November 2nd, many customers used the McRib Locator to track down the sandwiches and traveled hours out of their way to stock up. And let’s not even mention the hundreds of Facebook groups that have been created to “Bring Back the McRib.”

In fact, since the return of the McRib, McDonalds has added to this cult-like hysteria by creating “The Legends of McRib,” a comic book character named McRib whose adventures you can follow through Facebook.  The sandwich has also been a top trending topic on Twitter and the subject of many status updates.

Could the popularity of this sandwich come from its limited availability? Perhaps absence does make the heart grow fonder, even for boneless, compressed pork patties. McDonalds has sold more than 60 million McRib sandwiches in the last three years, but refuses to put it on their full-time menu. “It doesn’t sell well all year long because people get tired of it,” says McDonalds USA President, Jan Fields.

I’m not sure we will ever figure out what keeps the McRib mystique going, but for a few more weeks you can join in the wonder. Enjoy at your own risk.