An advertising agency founded by a man who’s been dead for 14 years.

The photo on the ad was of a man named Howard Gossage, who died in 1969. None of the three had ever met Gossage, much less had heard of him until they were tasked — according to Goodby — with writing the San Francisco Advertising Club’s creative show in 1980. Part of that task included naming the copywriter award after a famous San Francisco-based copywriter. They asked their colleagues around town and one name kept popping up, Howard Gossage.

From there, Goodby and Berlin went to go talk to Gossage’s partners and the more they learned, the more their admiration grew.

As a copywriter myself, I would have never heard of Mr. Gossage had it not been for a former Creative Director who had “The Book of Howard Gossage” on his desk. I never really paid much attention to it until a LinkedIn connection created a post about him. Once I started researching, though, I started to understand why Goodby, Berlin, & Silverstein would be so influenced by the man.

Gossage was ahead of his time. Today, interactive advertising is commonplace, but in the ’60s people didn’t have access to the internet. They only had traditional outlets, but Gossage found a way to make those interactive, especially print ads. This one for Qantas Airlines made a contest out of raising awareness for the airlines. “Be the first one in your block to win a Kangaroo.” It features an official entry blank that people could cut out and send back with their suggestion for a name for their fleet. 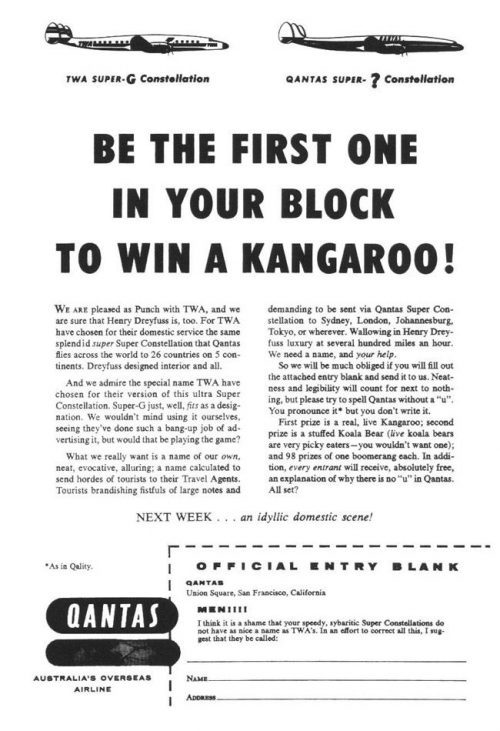 You have to admit, it’s a fun, memorable ad that beats the pants off a headline like “Fly Qantas Airlines.” But it doesn’t stop there. Gossage continued the gag with a beautifully written, tongue-in-cheek follow-up that announced the winner of the contest and the new name for Qantas, SAM. Notice both ads poke harmless fun at their competition, TWA. 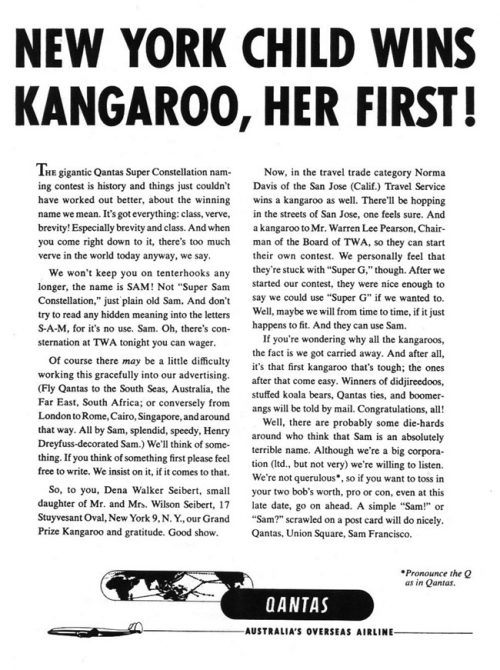 Gossage knew something many in our industry have forgotten. Ads have to be interesting. The very quotable man once said, “How often do you have to read a book, a news story, or see a movie or play? If it is interesting, once is enough; if it is dull, once is plenty.” I think he put an even finer point on things when he said, “People don’t read advertising, they read what interests them, and sometimes it’s an ad.”

It’s no wonder he had a distaste for the advertising industry as a whole. With so many mindlessly boring ads that just sell, sell, sell, he worried about their negative effects on society. He was — as David Ogilvy (we’ll get to him in another article) said, “Advertising’s most articulate critic.”

Gossage didn’t want just good advertising, he wanted to use advertising for good. He worked with the Sierra Club to stop the government from its dubious plan to flood the Grand Canyon for profit. To do this, he ran an ad that not only laid out the stakes but also had clippable sections to send to the President, senators, congresspeople, etc. The campaign worked and helped to save the Grand Canyon, proving that advertising didn’t just have the ability to sell. It had the ability to change the world.

“Changing the world is the only fit work for a grown man.” – Howard Gossage. 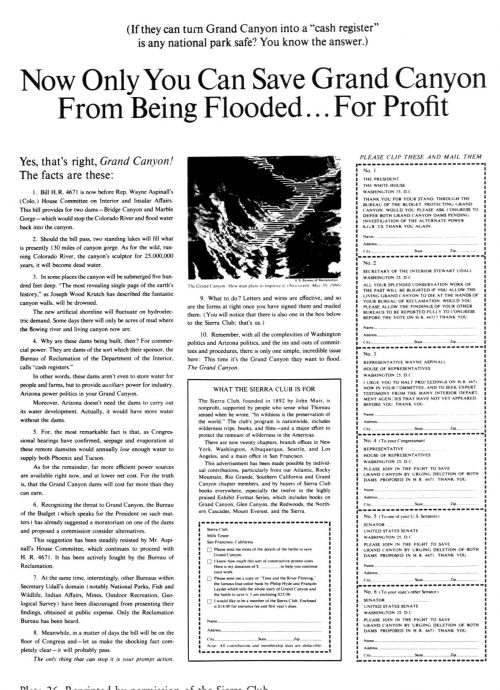 So why does a small agency in Louisville write about this man? Because we like to think we have a lot in common. He never grew his agency past 13 people and we’re at 12 right now. Also, we believe that ads need to be interesting to the audience — which is actually someone else’s audience, as Gossage would point out. And, we’re down to change the world, too. But first, we need to help fix the advertising world. With everything being data-driven these days, most agencies have forgotten to be interesting. You can help us put a stop to that. Send your idea to improve advertising to info@current360.com.