To Know the Kno

Home / Technology / To Know the Kno 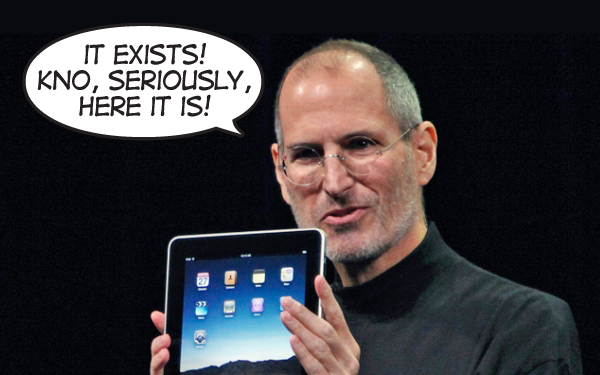 In late October, the New York Times reported on a startup in Silicon Valley that was offering a revolutionary product for college students: the Kno, a dual screen tablet that will allow college students to take notes, “manage products and organize their college lives.” When I read this, it was a true a-ha moment. It seems so obvious, why hadn’t anybody thought of this before? Oh yeah, Apple had. It’s called the iPad had. Never mind.

But wait! There’s more! The Kno comes in dual screen and single screen versions, and runs on Linux. Then the reporter mentions that it certainly is heavier than the iPad. To which the CEO of Kno responds, “compare it not with an iPad, but rather with a 20-pound backpack containing textbooks, notebooks and a laptop, often a heavy, 15-inch or 17-inch device preferred by students.”

Huh, what? DON’T compare it to the most obvious comparison, the Kno’s primary competitor in the market? OK. Let’s pretend the iPad doesn’t exist and the Kno is the first on the scene. I see two problems right away.

First of all, how do you pronounce it anyway, hard or soft K? If I have to ask how it’s pronounced, you’re already a step behind. Think of successful brands, like U2, Microsoft, Gaga, Apple. I can look at these words and my familiarity with the written English language comes to the rescue. I know how these words are pronounced. I don’t have to ask! This might not be a deal breaker for some, but to me it portends stupidity ahead.

Secondly, I seriously doubt that textbook publishers are going to be distributing their tomes digitally any time soon. I may be entirely wrong, but when I was in college, the publishers had a problem with secondhand books. Why? Because they made their money on the premise that college students need the books and will bend over to pay for them. So it seems that we are supposed to pretend the iPad doesn’t exist and the publishers are supposed to pretend that Napster never happened. But if they do start distributing their books digitally to college students, the most cold-hearted, bloodthirsty, thieving group to walk the earth since Blackbeard (according to the RIAA), then they get what they deserve.

Finally, on Monday, Kno announced that the single screen version will sell for $599. That’s $100 more than the iPad. Nuts. Suspension of disbelief is suspended. I can’t pretend a tablet that looks like the iPad, but is heavier and costs more is a new big thing. It might be aimed at college students, but they don’t generally pay for their computers. So, Kno? Knever mind.